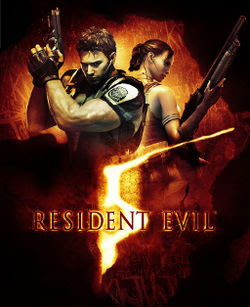 Yesterday I played the demo for Resident Evil 5. The game again has no proper zombies, but still I was looking forward to it. Resident Evil 4 was mind blowingly good, a game I had no interest in (due to no zombies, but the day I saw it at a friends house was the day I rushed out to the shops and brought it.


Resident Evil 5 is set in Africa, the main character is unfortunately Chris Redfield; surely the very worst and most generic of all the Resident Evil characters. He is joined with either an A.I controlled or human controlled second character, some woman.


There are 2 different scenes you can select from the demo. The first sees you taking refuge in a house under attack from masses of zombie villagers. I got overwhelmed and killed. The gun in the demo was dreadful, and really seemed to have no impact on the enemies, like a cap gun it felt and sounded. My A.I controlled partner (hey, so I have no X-Box 360 friends) was useless and got battered. For some ridiculous reason Capcom have decided to implement Resident Evil: Outbreaks frankly broken inventory screen, in which the game doesn't pause while your in it. When your surrounded by hordes of angry villagers and your close to death the last thing you want to do is bring up a inventory screen to use a herb to cure yourself as this will most likely result in you being murdered mid selection.


The 2nd section took place in a square arena it had lots of villagers and a chainsaw wielding maniac chasing you. My A.I controlled moron lost all her bullets, and stole all the herbs before I could pick them up. I was only able to give her all my bullets, not just some of them. I had my head lopped off whilst trying to select a herb from the broken inventory screen.


I was really annoyed with this demo. I hope it was just the fact that it threw you into action scenes that made it bad, and that the actual game will be more...well fun. Not impressed, not impressed at all.
Maybe it's too much Far Cry 2, but I'm really sick of African locations in games.
Posted by Daniel Simmonds at 11:40