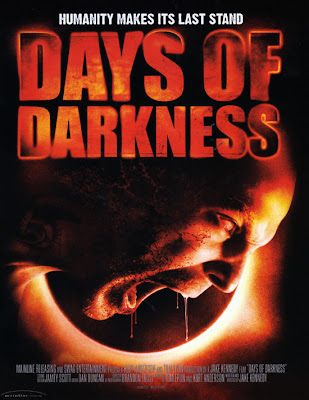 With films like Days of Darkness you really know where you are. Terrible acting, cheap music, and lots of blood, beautiful!


The film starts with a couple out on a camping trip. Returning from the mountains they discover that while they've been away everyone seems to have died..and come back to life as genitalia-less zombies. Rescued by a sword wielding man they are escorted to a small mountaintop military base where a ragtag group of survivors are holed out.


The film starts off as pure zombie fest, but turns into more of a sci-fi as the main character reaches bizarre conclusions as to the virus origins (which while true in terms of plot, in the circumstances are totally far fetched leaps). At one point in the film for instance the main character gets out a zombie penis he's been carrying around in his pocket, wrapped in a hankie and shows it to everyone while discussing a theory, and they all react as if it's the most normal thing in the world to do! 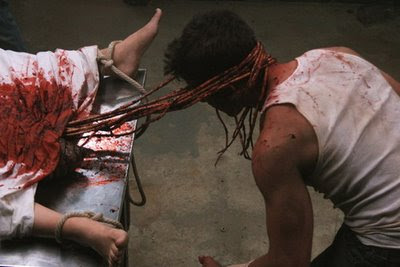 The film was entertaining and had a satisfying message about the goodness of alcohol. Lots of zombies, blood, and quite a few tentacles make for a terrible yet fun film.

Sounds like my kind of trash! I'll look out for a (cheap) copy.

I must say I'm intrigued as to how that guy manages to get hold or a zombie penis, dispite them being genitalia-less!

Well there bits have kinda rotted off, and sorta just there, lol. As to how he got one, it involves some sort of broom thingy, heh