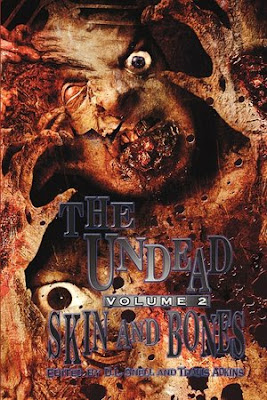 Zombie books are great. Zombie compilation books can be even better sometimes. This book contains 14 short stories, 1 novella, and 1 preview.


Short stories are nearly always fun to read. In this book each story has it's own piece of art work to accompany it. It's a shame that nearly all the pictures are utterly dreadful. Here's a run down of the stories;


Cyclopean by David Wellington
A strange fungus has taken over an office building, and the workers contained within. I loved David Wellingtons trilogy (Monster Island, Monster Nation, and Monster Planet) so was looking forward to this one, and yes, it was a great start to the book.


The Abbot and the Dragon by David Dunwoody
Set in a medieval fantasy land. It concerns a young boy who has been exiled from his village and is being hunted by both a zombie dragon, and a crazed warrior. Has a cool ending.


The Wranglers by Eric Brown
A story about Zombie Cowboys. Not too great.


Casual Friday by Matthew Shepherd
A fun story set mostly in an office, about a man whose job is sending him crazy. A twist on the usual zombie story.


Agent Red by Philip Hansen
A high action story following a group of soldiers battling the undead in an urban setting.


Something Fishy this way comes by Joel Sutherland
An odd story, about a boy who survives zombie Armageddon, and the strangeness that comes after.


The Hill by Eric Shapiro
The first (and only) creepy tale. I miss being scared by zombie stories, so many just fail or don't even try to be creepy. In this tale no one ever leaves their homes anymore. There is something bad outside. A boy and his sister decide to head out to see for themselves just why everyone is in hiding.


The Finger by Matt Hults
A fun morality tale. A man has a plan to sue a restaurant by faking an accident. Quite humorous.


Food for the Dead by Meghan Jurado
A fantastic short essay about the consequences on the food chain caused by zombie Armageddon.


The Traumatized Generation by Murray Leeder
An unpleasant story about desensitising the young to the undead. A good tale, and a sad one.


Alive eye for the dead guy by Ryan Thomas
Comedic story about a TV producer who decides to do a zombie makeover show. Fun.


'Til the Lord Comes by Scott Standridge
A young mortuary worker witnesses the dead rising. But is it really happening, or is there another explanation?


Ravenous Angels by A Courters
This would make a great film. A sheriff in a small American Town investigates the bizarre behaviour of the Towns teenagers. Cool twist as well to it.


Misfortune by Vince Churchill
The shorts end with a classic zombie Armageddon tale. Perhaps the unluckiest man left alive attempts to survive, and also to keep hold of his winning Lotto ticket.


The rest of the book is a story by D.L Snell. The story takes up about 1/4 of the book, and is rubbish. It's a coincidence that he's the Editor of the book, and also has the biggest story. Skin and Bones is about a necromancer who has brought the dead back to life to get his revenge on a grave digger and his family. Unpleasant, boring, and just plain bad.


Overall, as compilations go it's not the worst one out there. It would have been nicer to have more actual creepy stories, but overall most the stories were good.