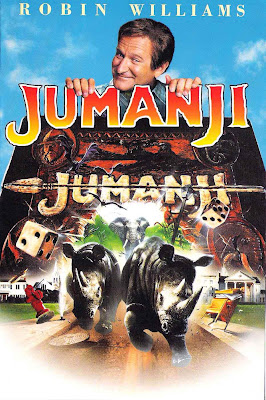 I saw the 'kids' film Jumanji the other day. I can fearfully report that it is the most creepy, sick, depraved film I have seen this year! I can't believe it's only a PG! it should be a 15 at least!


I had goose bumps watching this torture porn. The basic plot is this; a young boy in the 1960's, tormented by bullies when out, and brutalised by his strict father when at home discovers a Africa themed board game called Jumanji. Him and a female friend decide to play the game. She is attacked by rabies ridden giant African bats, while the boy Parish is sucked into Hell. 30 years later a young brother and sister discover Jumanji, and inadvertently become involved with the game. They, with a freed Parish (played by Robin Williams), and a mentally impaired woman (the girl from the 60's now grown up) must travel to the very depths of Hell to close the gates, and forever lock away the nightmares they have unleashed. 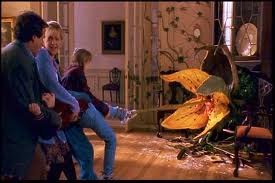 The film is scary on many levels. Each roll of the dice releases another monstrosity from Jumanji. There are plagues of animals released, natural disasters, and even a deranged serial killer. All these are evil, and intent on death and destruction.
The animals are not real animals, as is shown by the special effects for them. Instead they are a mockery of gods work, vessels for demons to invade the world, and are pure evil intent on causing mayhem. Creepily intelligent, you get a stampede of Elephants and Rhinos intent on crushing people to death, psychotic monkeys armed with guns, and infestations of Killer plants and insects. 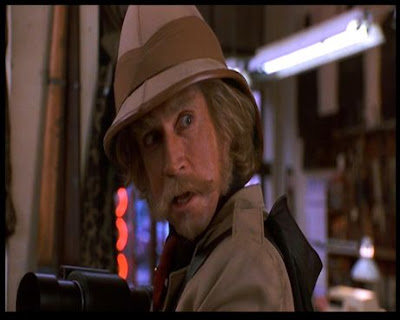 The (in)natural disasters are terrible, an indoors flood, supernaturally contained to one house nearly drowns the heroes, while a earth quake splits the house in half, intent on dragging the heroes down a chasm to Hell. The whole forces of nature are under the games Demonic control.
The films themes are quite adult. The Serial Killer (in the form of an English Explorer complete with Blunderbuss) is played by the same actor who plays the Parish kids Dad. He repeatedly tries to hunt down Parish, showing a terminator-esque terrifying determination to kill him at whatever cost to himself. It shows Parish's internal fear of his Dad, and speaks of his fear of his fathers abuse. 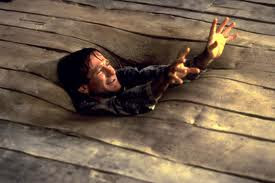 The board game itself 'Jumanji' is a sick depraved game. It emits a drum beat, audible only to children, and hypnotically drawing children to it. It wants to eat children's souls, feeding off their fear. However it was created, it was done only for evil reasons, a fear of which I have never felt since I received upon thinking on how this game came into existence. In a twist of irony, the only way to defeat the games evil is to play it, each roll of the dice gets you closer to defeating the game, but also opens more doors of Hell, unleashes more horrors onto the world.
It is only a fluke that the characters actually survive. The girl is fatally wounded by a poison dart spat from a flower, the boy is turned into a mutant child monkey, and the adults (Parish and the woman) are both executed by the serial killer hunter, but the lucky dice roll of the doomed Williams closes off the powers of the game and reverts the entire world back 30 years. 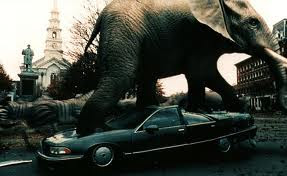 The ending is bone chilling. The evil game, weighed down with chains and thrown into a river and many years later washes up on a Japanese beach. The horrific tribal drums start beating, and chillingly ends with 2 young Japanese girls discovering the game as the screen fades to black and the credits roll.
A very very sick, scary film, one to watch with the lights on!

lol, you really don't get my most fantastic humour in this article. Seeing as how you can't even spell I am not surprised :p

You forgot to mention that this is also a black comedy / adventure flick. It really has nothing to do with hell although there are some scary animals in it. I think tweens can easily handle this film.

Years later and people still don't understand this is a joke review! Of course Jumanji isn't a horror! Just trying and evidently failing to do humour