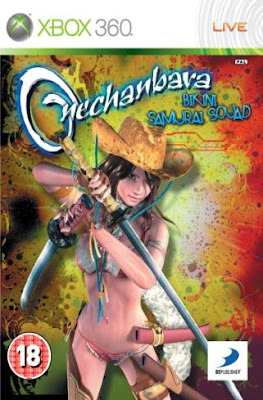 Onechanbara Bikini Samurai Squad - what a fantastic title for a game. As with everything I picked this up cheap. I originally planned to buy this, and the Wii prequel when they were first released. Personal issues made me not buy them.

So this is the sequel to the Wii game. It is a hack em up, much in the style of the Dynasty Warriors series. You play as 1 of 3 scantily clad girls rampaging around a city fighting off hoards of zombies with either swords, or guns. The game is very bloody, all enemies you fight end up in chunks, limbs, heads, and stomachs all being sliced through. It isn't uncommon to be left with a pair of legs stumbling towards you.

The story is very basic, basically some organisation intent on world domination has released a zombie plague to distract people from their plan. There are references to what I assume is the Wii prequel game, with recurring characters appearing from that. 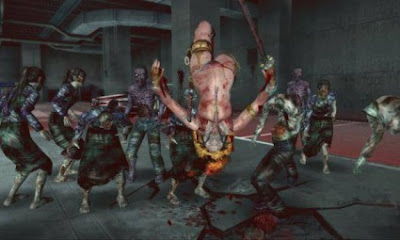 The game took me about 10 hours to beat on my first play through, there is a levelling up system in place, so to totally max out your characters you would need to play the game multiple times. Each level is graded, higher grades resulting in new clothes you can dress up the girls with. The...ahem chest physics are ridiculous, the chest area swings around with the slightest movement, think Dead or Alive up on 11.

There are lots and lots of different enemy types, and right to near the very last level new enemy types are being introduced. There are basic zombies, armed with axes and knives, then you get the police zombies with their guns. Later on Soldier zombies and giant zombies are introduced. As well as these there are zombie dogs, crows, and mutants. The end of most levels results in a boss fight, usually with one of the intelligent zombies who fights via martial arts rather than biting, there is a memorable boss fight against a zombie Whale which is quite fun. 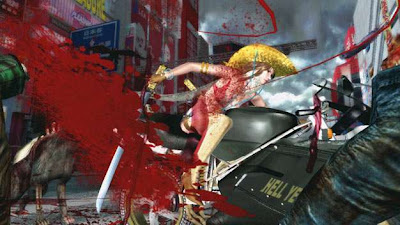 Overall the game can become quite monotonous with not enough variety in locations, or in what you do, a level at a time was about all I could manage, and the later ones become a real slog. There is one driving level in the game to split up the endless fighting, but the bike you drive is horrendously twitchy to control, and the whole level can pretty much be cleared by just driving in a straight line.

There are literally thousands of zombies to fight though. That is a good thing, and that makes the game worth getting. For zombies are ace. I will be getting the Wii version of this, but I do dread how awful the Wii-mote controls are going to be, it was exhausting enough using a regular control pad.

Posted by Daniel Simmonds at 07:40