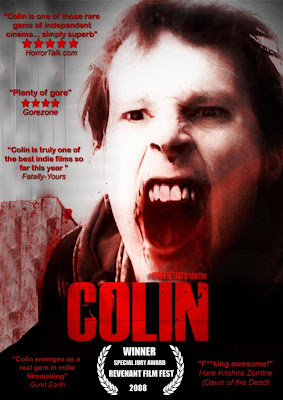 Colin is a low budget zombie film with a difference. The difference being that it is a fantastic film! After utter dross like The Zombie Diaries and The Zombie Chronicles I had convinced myself that low budget meant non-existent acting, non-existent plot, and painfully bad effects. Colin was like a ray of sunshine.

The film is kinda unique in that it follows the exploits of a zombie, rather than the usual focus on survivors. The film follows Colin as he ambles around some unidentified British town during a zombie apocalypse, accidentally getting involved in various activities such as a house siege, zombies vs. humans street battle, and even a kidnapping. The film appears to have no plot, but at the end in an inspired Usual Suspects style twist it becomes apparent in a bitter sweet way just how much relevance to his pre-zombie life the locations and people he comes across during his amble actually were. 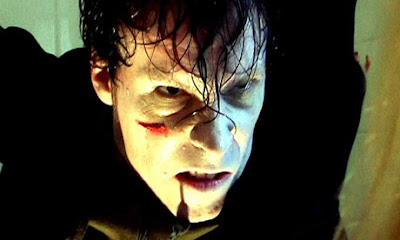 The film is amazing at creating a real sympathy for the zombie Colin. He comes across as almost an innocent. Sure he is a flesh eating innocent, but guiltless nonetheless. Following him in between the usual zombie shenanigans he comes across as sweet almost. Whether it be his angry confusion as some humans attempt to steal his trainers, or his puzzled wonder at some Duplo bricks he finds he comes across as endearing.

The soundtrack is good at creating a mood of just how messed up things. For the most part it sounds like the music is playing in reverse, a dreamlike quality to it. The zombie makeup is very good seeing how little the films budget was (just £45 allegedly). The worst parts of the film are actually those involving humans. The film for the most part has no dialogue, but scenes involving large groups of humans reveal the usual dreadful acting and oddness (eg: a man at a zombie invaded party when dragged to the ground, repeatedly stops trying to push away the zombies clawing at him to adjust his hat). 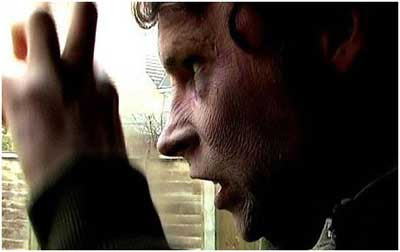 An amazingly bitter sweet and original film, a definite must buy for any zombie fans, or horror fans in general.

UPDATE: my dear friend (who I actually found as a result of this blog) uses Colin against me in any argument about her sometimes bad taste in zombie films. She insists it is a terrible film and so I put in a disclaimer here that this may not be for every-ones tastes.