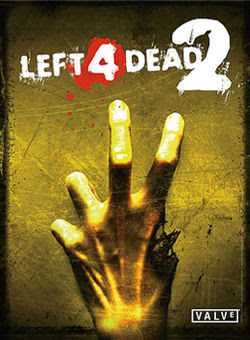 I got Left 4 Dead 2 yesterday, Played through all 5 new campaigns in single player, the game does feel quite different to the first.

The game this time around takes place around New Orleans, with a deep south feel to the whole game via it's music, and it's locations. The 5 campaigns each take around an hour to do (single player, on Normal). The first campaign feels much like the levels of old. Your aim is to get to a shopping centre. It really is Left 4 Dead by numbers in terms of levels design, but is a good intro level for the game. The other 4 campaigns are where things get really cool though. Number 2 - Dark Carnival as the title suggests is set in an amusement park. It features a fantastic climax as well as the games only zombie clowns. Number 3 is set in swamp land, ending in a Plantation Manor. The 4th Campaign called Heavy Rain sees you and the fellow survivors on a mission to find some petrol for your escape vehicle, during a horrific thunderstorm. This campaign is unique in that you head to an objective, and then back to the starting position. The final mission features an amazing bridge gauntlet at it's end. 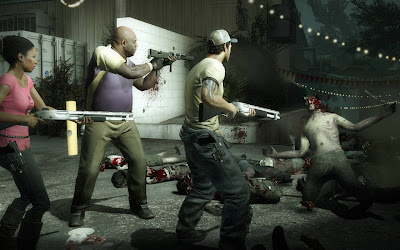 The weapons are as good as always, but it's whats new that is really exciting. There are now melee weapons in the game. Cricket bats, police batons, even samurai swords all make appearances, and are very very effective in chopping up zombies. They really change the way the game is played. No longer are you as good as dead if you get surrounded by zombies, as now you can chop them all up easily. It just seems a bit odd that a guitar is just as effective as a machete in decapitating them. There is also a amazing rare chainsaw, but this only has limited use as it guzzles gas. As for the old guns, there are a bigger variety, as well as upgrades (such as laser sights) and even alternate ammo (incendiary rounds, and explosive rounds!).

There are more special infected this time. On top of the old guard of Tank, Smoker, Hunter, Witch, and Boomer there is now Spitter (spits pools of corrosive acid), the Jockey (can jump on survivors to control there movements), and Charger (like a weak version of the tank, but can juggernaut his way through the survivors). I don't know how these new specials control as have not played Versus mode yet.

The A.I for the other survivors is as average as always. They do an ok job, but are no substitute for real humans. The game has a lot of slow down in places, the last mission in particular had quite horrendous slow down as the number of infected is at it's largest there.

I like this game, I really hope I get to play it with humans, as that's the way it is supposed to be played. I never got to play the first Left 4 Dead as it was intended and as a result missed out. Gamertag is Happyhead UK if anyone wants to play!

UPDATE 15/12/2012: I never did get to play the game with humans I knew, as such the game quickly became very boring and unsatisfying.
Posted by Daniel Simmonds at 02:56