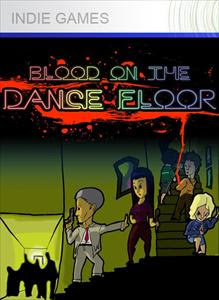 Indie games on the X-Box are very plentiful, and as I have said many times before there are many zombie games on the platform.  Zombies have become a fad these last few years, though that does unfortunately seem to be waning now.

Blood on the Dance floor is a twin stick shooter which owes a lot to the classic Amiga game Alien Breed (also recently remade for X-Box Live Arcade, check out my review).  You control one of 4 survivors, and are pitted in an arena where you must survive waves of zombies for as many rounds as possible.  Each round sees the zombies get stronger and faster.

There are two different stages to choose from.  The first 'Suburbia' takes place around a shopping complex.  There are car parks, roads, as well as small shops you are able to go through.  Obstacles such as abandoned cars, hedges, and objects litter the large arena.  The second stage is titled 'Dance Floor'.  This comprises a large dance floor made up of flashing disco panelled flooring.  In this stage there are no obstacles.  Both stages feature groovy dance music.

Blood on the Dance Floor doesn't disguise the fact it is a game.  Large disco style font introduces each round, and at the end of each round you enter 'Coffee Break' which is a chance to pick up weapons, health, and power ups before the next round begins. 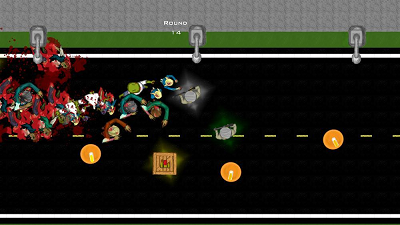 There are a variety of weapons dotted around the levels, the weapons get stronger the further into the game you get.  You start off with glocks, and wrenches, later levels sees the appearance of shotguns, desert eagles, and fire axes.  Also there are several different power ups you can collect which include speed boosts, and extra weapon damage.

The aiming is quite hard as the only indication of where you are pointing your gun is by looking at your gun, there is no aiming reticule, and your character holds the gun in an odd way, so aiming takes some getting used to.  I found melee weapons to be useless as you quickly get killed if resorting to them.

There are about six different types of zombies.  Most are all pretty much identical except do different amounts of damage and wear different clothes.  There are also little girl zombies, these blond haired children are much faster than the regular zombies but much weaker also.

The graphics are quite basic, the overhead view is functional, and the zombies splatter in an arcady way.  The screams and shouts from the zombies as they are killed are cool, but it would have been better if they made noises generally also.

Really, for 80 Microsoft points you cannot complain.  The game is up to 4 players, I imagine the more people playing the more fun it would be.