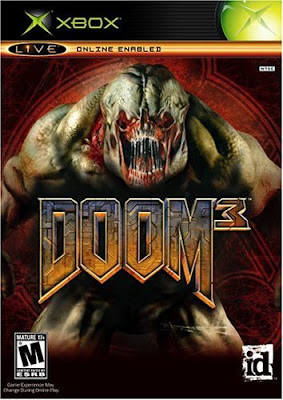 Doom 3 is a vastly under rated videogame in my opinion.  Many many people were disappointed with how vastly different it was to the previous iterations.  Where Doom 1, 2, and Final Doom were arcady shooters Doom 3 is a heavily scripted descent to Hell.

The game starts with a small space craft landing at a UAC Base on Mars.  Among the passengers is a Solider; you, who has been hired due to a number of fatalities around the Base.  Your Boss 'Sarge' gives you your first assignment - to locate a missing Scientist.  Soon after finding him chaos descends on the troubled Facility.  Demons - lots of them have invaded the base and are quickly possessing people by the bucket load, and killing everyone in sight.  With Pistol in hand you head off to confront this threat.  But are you Doom(3)ed? 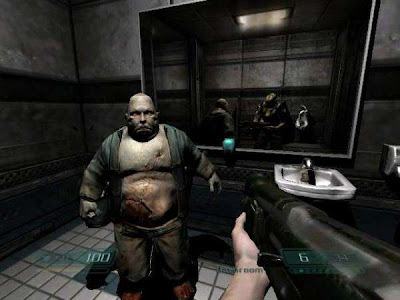 The game is a first person shooter (FPS) and is very very good.  The location of a Mars Research Facility is well realised, lots of incidental details such as flashing lights, steam vents, and electronic beeps create a sense of a living, breathing place.  Throughout the game you come across lots and lots of PDAs from various Staff who worked on the base.  Everyone from Soldiers, to Scientists are represented.  Usually each PDA contains a few emails, while some also have audio recordings.  These bring lots of life to the game world, and really reinforce the feeling of the Mars Base being a (badly run) Scientific Facility.

The root plot of the game is that during experiments with Teleportation the UAC Scientists accidentally opened up a gateway to Hell.  Rather than abandon their research, the head of the Base Malcolm Bertruger instead decides to study Hell, and bring back live specimens, and technology.  Slowly madness infects most the Staff. Berturger is the main antagonist, seeming to have led the Demon invasion of Mars.  Throughout the game he taunts you, mostly by just laughing evilly every now and again.  Your character has access to a radio, which is where most the plot direction comes from.  The first 5th of the game is very exciting as various squads of Soldiers communicate with each other via the radio, and die 'live' on air.  You are led by Sarge who wants you to send out a distress signal to Earth. 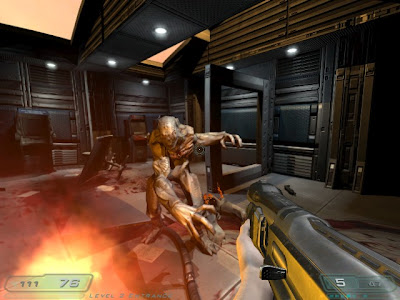 The enemies have all existed in previous Doom games, but are near unrecognisable here.  The main enemy to start with are zombies.  Staff who have been possessed by Hell and turned into brain dead ghouls.  Imps are another main enemy type.  These are Demons who can fling fireballs.  There are lots of other Demon types.  There are giant spiders, Caco-Demons, Hell Knights, basically look the same but have various powers such as shoulder mounted rocket launchers, tentacled arms, and plasma balls.  Bosses turn up throughout the game.  These are all giant beasts, and introduced via short cut scenes.  They all look the same kind of monstrous; lots of browns.  Bosses are quite fun to fight, but with the exception of a few don't require any real tactics to take down.

The weapons all feel quite wimpy.  The old favourites such as Shotgun, and of course the mighty BFG turn up, but it is only really the mini gun which feels like it has much of an impact.  Later on in the game you get a weapon called a Soul Cube which basically acts as a smart bomb once powered up.  Overall though the weapons are quite lame feeling, though sound the part (well some do).  Nearly the whole game is set on the ruined Mars base.  The locations are created to feel real, so you have Science labs, Server rooms mixed in with Cafeterias, and toilets.  A later section of the game sees you take the fight to Hell.  This location is very different in feel to the solid corridors of Mars, and brings a nice slice of variety with it's ever transforming environment.  Music is near non-existent, but instead lots of ambient noise is made, as well as lots and lots of screams, shouts, laughs, and explosions. 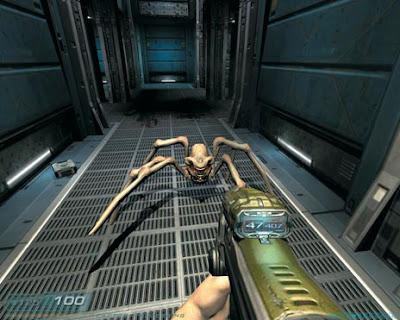 The game still holds it's own nowadays, looking good, and is still a joy to play.  Sure it is nothing like the previous Dooms, but the atmosphere is fab.