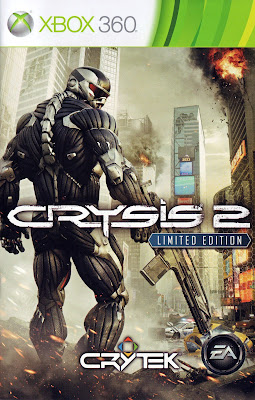 The first Crysis game was only released on the X-Box 360 as a downloadable game. I would have liked it but stuck at £15 it is a bit too expensive for my unemployed state. The first game as far as I can tell was set on a tropical island and had you playing as a man in a special suit battling tentacle alien creatures.

Crysis 2 takes place several years later, New York has come under alien attack, an attempt to evacuate the city has gone very wrong.  You play as Alcatraz; an elite soldier sent in by submarine to rescue a scientist who might have a way to defeat the Ceph (the name of the alien force). Your team are ambushed and you are rescued by Prophet (the super soldier from Crysis) who gives you his suit before dying. The Ceph are out to stop you, as well as a private soldier company 'CELL' stationed to New York to keep the peace, but who seem to have gone rogue. 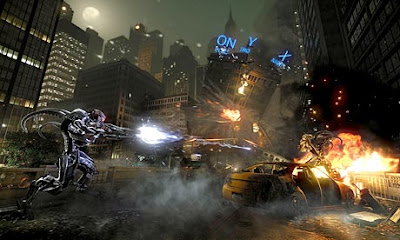 The plot is all over the place and quite confusing, needless to say you are a super soldier on a mission to hunt down blue objective markers all over the big apple.  Your suit lets you jump long distance, become heavily armoured, and also to turn invisible.  You start off quite weak but by buying upgrades you can get to the point where by the end of the game you can pretty much just walk from objective to objective unimpeded.

This is perhaps one of the best looking games on the 360, up there with Rage certainly.  The game looks fantastic and you are never a few steps away from the next set piece with earthquakes causing the ground to up heave, and buildings to collapse as you traverse them.  The game has a real sense of place, you start off on the outskirts where you travel through evacuation posts, and quarantine tents. Times Square, Central Park, the Statue of Liberty and other iconic landmarks of New York all appear, heavily changed due to the place being one big graveyard of body bags and destruction. Crysis 2 is action all the way, story plays into the action a lot when at least a billion times in cutscenes your suit gets terminally damaged resulting in you laying or crawling helplessly. Falling out a window, being swept away by a flood all look great in first person. Some vehicle sections break up the action but are not particularly special.

It is quite a long game, around 7 to 8 hours I would guess, and has a pulse quickening soundtrack but it is not all perfect.  Cutscenes feature a giant green 'A' button obscuring them, there are many weapons but they mostly feel the same to use, and the plot is one big mess. More variety would have been nice as well, and it is kinda funny that if you upgrade your stealth you can pretty much just walk past every single enemy without the need to engage. A lame excuse is made at the start of the game for why your character doesn't speak - he is hungover apparently...um ok. 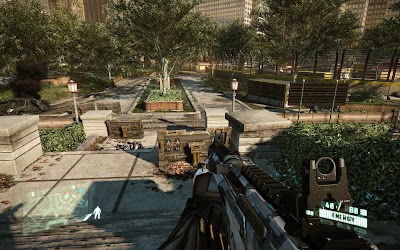 Looks great, sounds great but maybe a little too much style over substance. Crysis 3 has recently been announced, I will keep my eyes peeled.

Posted by Daniel Simmonds at 02:32

One of my favourite 360 games. The bit where the building collapses next to you is great!

It was quite fun if a little confusing plot wise, certainly much better looking than I expected

as concerning crysis 3, I don't mind them re-using the Cryengine 3 for this. It looked beautiful the first﻿ time, and is still ahead of the curve now. And Crysis 2 didn't have too many glaring problems engine wise, so I just hope they used the extra time they got from not designing a new engine to fix the few that were there.