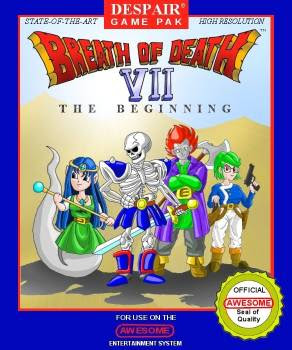 Breath of Death VII is a retro style old school RPG. It tries to capture the spirit of those games so you have random battles and simple graphics but the game also makes fun of those style of games at the same time.

The game is set on Earth after Armageddon destroyed the world. Out of the ruins rose monsters who have now got to the stage of fantasy civilisation. You play as a skeleton called Dem who teams up with Sara (a ghost) to investigate some ruins. There you discover a robot who had been programmed to retrieve some magic crystals. Deciding to find these crystals for yourselves you head off to quest, in the process recruiting two additional characters in the form of geeky Vampire Lita, and a French zombie Prince called Erik. 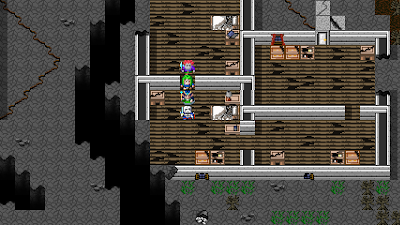 This was one fun game, sometimes it is good just to put on some podcasts and go and grind for a while. It helps that each area you go to in the game has a set number of random encounters so what I would do is just hang by the save point and kill all the enemies in the area before being able to explore the maze like levels at my leisure. After every fight you get all your health back, and save points give your magic points back.

Though set in a human-less fantasy world there are nods to the civilisation that came before. Locations you visit are many times ruins, but they are ruins of modern cities so are full of roads, rusted cars, houses, lamp posts and traffic lights. A mournful tune plays during dungeons which give them a sad feel that is at odds with your cheerful and silly characters. There are many enemy types which include everything you would expect; zombies, goblins, ghosts but also more novel ones such as haunted cars, zombie cyborgs, and possessed chemical beakers. Boss fights appear quite a bit but the bosses just appear, they have no story reason, I guess this fits into the old style gameplay. 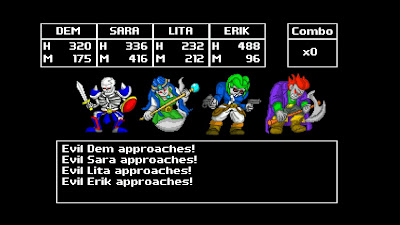 At around 6 hours long it is shorter than I would have liked of an RPG, but sensible seeing how it is a budget game (and I believe just 80 Microsoft Points) If you want a blast from the past and fancy some RPG in the vein of old school this is for you.