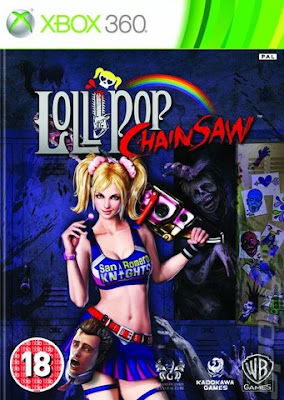 Suda 51 is one of my favourite game developers, he has a string of cult classics to his name including Killer 7, No More Heroes, Flower, Sun and Rain as well as Shadows of the Damned. His teams latest game Lollipop Chainsaw is all about zombies so I just had to pick it up!

High School cheerleader Juliet Starling arrives at School (San Romero High) on her 18th Birthday to discover the place is over run with the walking dead. Rather than panic though she gets out a chainsaw from a duffel bag she is carrying. It turns out her and her family are a secret gang of zombie killers (quite convenient!).  Heading into the mass of zombies she searches for her boyfriend but comes across him just as he is bitten. Rather than have him become a zombie she lops his head off and using magic saves his life (well saves his heads life). Wearing her boyfriend's head on a key chain around her waist she heads further into the school to find out what has caused the outbreak. 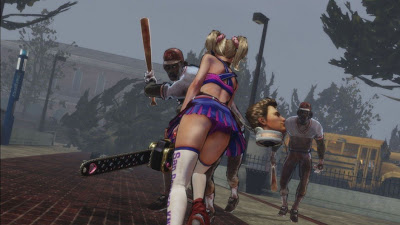 Lollipop Chainsaw reminded me a lot of the Onechanbara games, except where they got boring due to constant repetition this one always mixes things up so your not constantly just fighting. Suda 51's sense of humour is in abundance, Nick (Juliet's bodiless boyfriend) in particular is a highlight, struggling to cope with not only being just a head, but also having no control over where he goes due to being attached to his girlfriend. The zombies can talk and often throw vulgar insults and threats at Juliet, one line in particular that stuck with me due to it's unexpectedness was when a random zombies shouts "I want to f**k your Dad!". The game is full of swearing and innuendo, one boss even uses swear words as a weapon, when ever he swears his words physically materialise and hurtle towards you (doing a Q.T.E while avoiding 'C**ksucker!' also stuck in the mind).

Talking of bosses they really influence a lot of the game. Main antagonist (the cause of the zombie outbreak) has summoned 5 super zombies to the Town, each in a different area, and each based on a different musical genre (punk, viking metal, psychedelia, disco boogie, and rock and roll). Not only does this affect the background music of the stage, but also how the levels play out. The Viking Metal level for instance has plenty of rain and lightning, as well as a Viking long ship, the psychedelia level has magic mushrooms that make you hallucinate, and whose boss is a stoner hippy zombie. 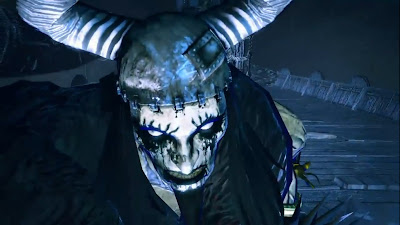 Starting off with only a limited move set you can earn coins which can be used at online shops to purchase new combos, costumes, stat increases, art work and music. The zombies are varied and involve a number of different types, you have American football zombies, geek zombies, ones loaded with explosives, teacher zombies, as well as farmers, punks, and even giant chicken ones!

As mentioned there are a variety of different activities to break up the action. There is zombie basketball where you have to score by lopping zombies heads off into the net, zombie baseball where you have to protect Nick as he scores runs. Other activities include zombie combine harvesting, videogames (that you are part of) and students to rescue (needed if your to get the good ending). They are only ever fun once though, so when some reappear later on in the game they are not welcome due to increased difficulty. One big complaint also is the last level which just feels rushed compared to the solid feel of the rest of the game, a shame the level was not polished more as it leaves a bad impression. During the game you get phone calls from your (unlikable) family, these are all pretty rubbish to be truthful and I could have done without. 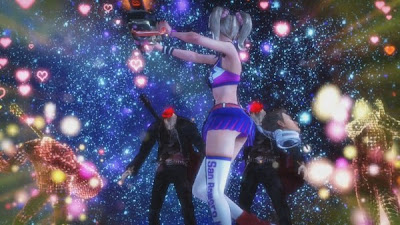 While more mainstream than his previous games Lollipop Chainsaw is a simple, fun, fun game that still keeps his style of weirdness, along with ultra violence, and plenty of random swearing and sexual references, and as always, it has zombies in it!