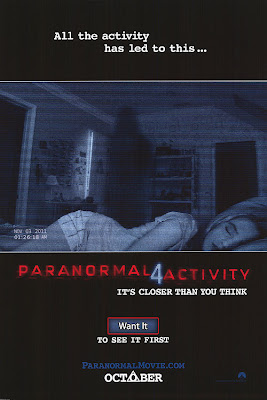 Yeah, yet another Paranormal Activity film is out. I was patient, I enjoyed the first two but the third was just a snooze fest which brought no new ideas (actually removed some as it was set in the past). The fourth film introduces the magical wonder of X-Box's Kinect.

Paranormal Activity 4 is a direct sequel to two, set in 2011, five years after possessed Aunt Katie kidnaps her nephew Hunter and vanishes. Alex; a 15 year old girl starts noticing strange things are happening in her house when creepy kid Robbie from across the street moves in due to his Mom being hospitalised for a few days. Robbie is always serious, walks around the house in the dead of night, and talks to a sinister imaginary friend. Anyway with all this bizarre stuff happening (things moving around on their own, loud unexplainable noises) Alex and her boyfriend Ben secretly set up webcams all over the house to catch any of this stuff. Knowing the format of the previous 3 films you can pretty much imagine what happens next. 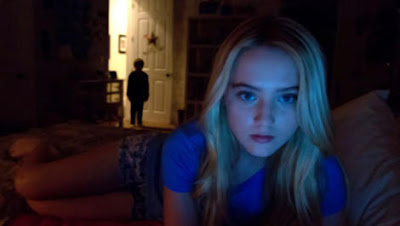 Sigh. Paranormal Activity 4 is a scary film in places, it is just that it is so predictable now that many of the scares are completely reduced. There is only so many times you can see someone being dragged off down a hallway by an unknown force before it becomes normal, and expected. Having seen the terrifying Sinister the night before this was like entering the shallow end of a pool of terror, parts were scary but nothing compared to that film.  Being a found footage there is of course no soundtrack but I found this quite distracting this time around, again going back to Sinister but that proved what a gigantic addition music is to horror. It tries so hard to scare, to be creepy but almost always fails. Not one of the dozen or so jump scares in Paranormal Activity 4 made me jump, or even be surprised, while as mentioned the dragging scenes, and floating objects, shutting doors etcetera made little impact. The only fearful parts for me here were the loud random noises, and of course the last 5 minutes which were a thrill ride, much like in 3. You can't recommend a film based on the last 5 minutes though. The usual format of day and night cycles are used here, ensuring each time it turns to day any kind of atmosphere has dissipated.

The plot has gotten a bit lost now, having spread over 4 films a story that should have been told in 1, maybe 2 at most. The tag line for this one is 'All the activity has led to this...' I'm sorry to say but no, no it hasn't at all, nothing is explained, instead more convolution is added, it feels like padding to draw out the already stretched out storyline. The characters are for the most part unlikeable. Alex and her boyfriend are fun, nice characters, but Alex's parents are idiots, and of course her neighbours are just horrid. I must say though that Aiden Lovekamp who plays Alex's kid brother Wyatt does a fantastic job, more so than the creepy Robbie kid played by Brady Allen who does everything that makes badly done spooky little kid film roles so terrible and in the process comes across as totally fake. 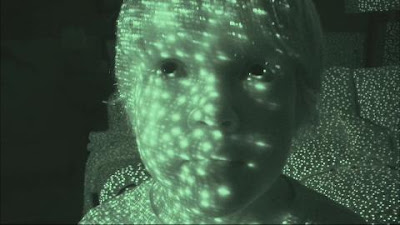 The whole point of setting up the cameras all over the house were to record the strange goings on, yet after the first few nights truly messed up stuff starts being filmed, yet no one ever bothers to look at the recordings again, a week or so later and not once has Alex or her boyfriend checked the footage when that was the whole point in the first place. Really it is just a crummy plot excuse to have cameras everywhere. It is also stupid that Alex is impotent, unable to get anyone to even listen to her, let alone dismiss her claims that something is in the house, though I guess the parents; portrayed as preoccupied with their marital strife hardly even acknowledge their children, or each other.

I just can't recommend this film, maybe if you have never seen a previous one in the series, but then what's the point of starting here? I really really hope they wrap up the story in Paranormal Activity 5 (already being made) as it should have been ended a long time ago. If the X-Box motion sensor was the only new idea they could bring (apparently it is able to reveal ghosts) then they need to find something different that I can actually Kinect to for the next one.

Posted by Daniel Simmonds at 03:38