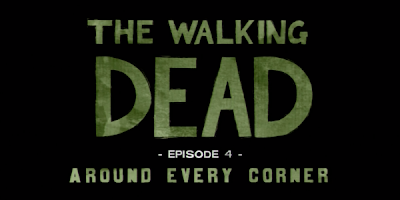 Around a month ago the 4th episode in Telltales amazing Walking Dead adventure series was released, last night I sat down and played through it. I always play through each episode in one sitting, it feels like that is how they are supposed to be played. While episode 1 was about discovery, 2 about horror, and 3 about loss, this episode seems to be about tension.

Having arrived at Savannah at the end of Episode 3 you and your motley group are determined to find a boat with which to leave on. Between you and the docks though lies a City full of the undead. But the zombies are not the only things to worry about as there seems to be a human threat who is determined you will not escape. 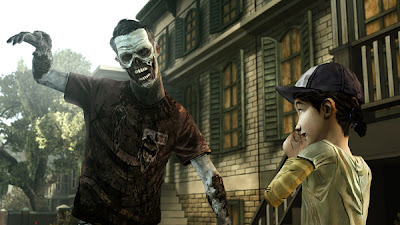 This episode is far more action orientated, many times throughout the two and a half hour playing time you will be called upon to take out approaching hordes of zombies. One thing this brought to be was how Lee's gun he fires never needs reloading, it seems to have infinite ammo which ruins the suspense a bit. Most of these shooting galleries sees you in first person mode aiming a very twitchy gun in the direction of the hordes, some slow down and jerking motions led to me dying completely unfairly a few times during these.

Around Every Corner also has quite a few traditional adventure style puzzles, one in the sewers in particular was very old school in feeling. This is still far more of a story focused game than actual puzzles but was a nice reminder of where the game evolved from. 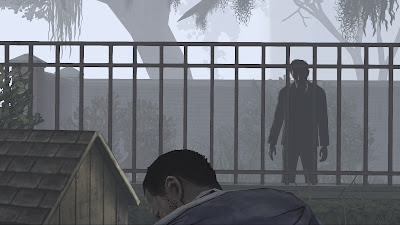 The Walking Dead always succeeds at forcing you to make horrible decisions, while they are still here they are not as harrowing as ones in previous episodes. They are still for the most part hard to make though and again this is down to the characters. The relationship between Lee and his ward Clementine is again wonderfully shown, and again makes you as the player really want to protect the little girl in a way few games can. A mid point that had an increasingly distressed Lee searching his safe house for Clem was so well done that I myself was getting really worried for her safety.

Story wise the hook at the end of 3 is not explored, instead it takes a back seat to a plot involving a mini totalitarian state and the people resisting it. Reminded me a lot of the Governor storyline in the comics though here it is dealt with quite briefly. A lot of new characters are introduced and just as quickly taken away again while as always everyone seems to be open to quick departures. There are only a few characters left from episode 1's large group and while feeling you know them is good all the new characters are so unknown that it is hard to ever care about them so I think that removes a lot from the emotional impact. 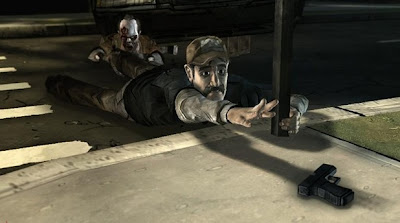 Around Every Corner had a structure to it, a beginning, middle and end yet unlike the other episodes the story is not finished, it ends halfway through almost like it is just a prelude to the likely to be thrilling depressing main story. What this episode does manage to do is create a sense of creeping dread, the music, the shadowy figure watching from the sidelines all create a tension that really doesn't lead up to anything. Despite all that though it does dump you off at a point where if you are invested in the game there is no way you can not play Episode 5. I myself cannot wait.