Spring-Heeled Jack: From the Tunnels of Hell by Craig Daley - Horror Comic Review 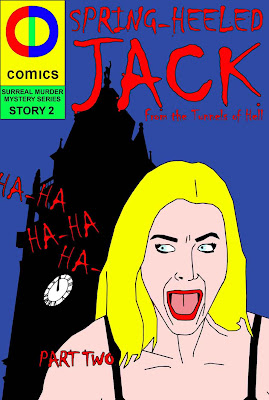 Earlier this year I reviewed Football Crazy a unique looking murder mystery comic by Craig Daley. It has been a while but I have now read another comic of Daley's, this one more horror based.

Every one hundred years on the night of Halloween a demonic figure with glowing red eyes and the ability to send men insane with fear appears in London to terrorise young women. Its ability to leap huge distances has meant that it has always evaded capture. Dating back as far as people can remember this thing has appeared like clockwork in the 73rd year of every century but come Halloween 2011 and the creature has returned out of sync. Not only that but it is now murdering people where before it only terrorised. Is it really a monster from Hell or is there a more down to earth reason. 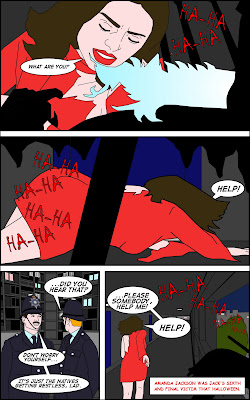 Daley has a really strange art style, one that I have not seen before, at once plain and strange but also unique and almost addictive to look at, I approve of it even if it does seem to lack motion in some ways (action scenes always look static rather than fast paced).

I love how this story is set out, it is split into three different tales almost. One takes place in 1873, one takes place in 1973, while the last takes place in 2011. The different time lines have different generations of families in them. The best one I thought was the 1973 one in which a young man and a Police Officer contemplate going into the tunnels under Sheffield in search of the demonic prankster. Has quite a cool horror vibe to it.  All in all Spring-Heeled Jack is a lame villain in real life and here, but Daley creates a reason to it all which is interesting. Football crazy had a very cool and inventive twist to it, again here there is some really interesting reveals done, though the main one confused me a little bit.

Another good comic though, hypnotic, and entertaining and worth a look at. Spring-Heeled Jack: From the Tunnels of Hell is in two parts, both are under a pound each and can be brought at Drive-Thru Comics

Posted by Daniel Simmonds at 11:53