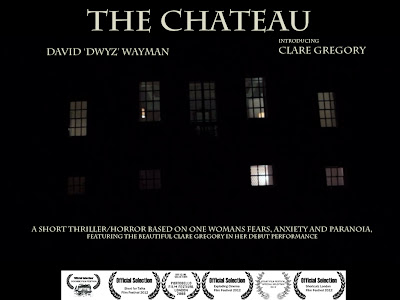 The Chateau is a short horror film directed by David 'dwyz' Wayman and starring Clare Gregory. It has been the official selection for 8 film festivals.

A young woman arrives at a Chateau out in the country, it seems she is awaiting the arrival of her boyfriend. I got the impression that she had not really been to the place much before as she seems out of place with all the old paintings and furniture. Anyway this being a horror there seems to be some sort of ghostly presence in the place, not happy with her being there...

I love short horrors, they never have time to get boring, and usually the short time limit allows the director to not get bogged down in exposition and just get to the crux of the tale. Gregory is a good choice of actress here (her debut role as well) in that she is believable. All too often you get characters talking aloud to themselves for no good reason, here she is silent as you would be on your own, but her actions just all seem natural.

A lot of points in the film I did not understand the importance of, such as her constant messing around with a ring she had on, it seemed to be important to the character, and even seemed linked to the supernatural events going on in the story but was never explained. This is not a bad thing, I like making up my own theories in my head (even if I am just being dense and it is actually obvious!). It all leads up to a chilling ending that while expected still was effective. Concise, interesting, and really not a bad little film.

Posted by Daniel Simmonds at 02:43