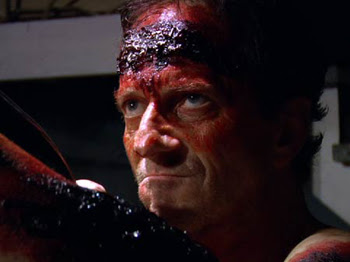 As is fast becoming my mantra or catchphrase here is yet another blog piece about something I was alerted to many months back. This time it is news about a horror film named Brutal.


It looks to be a horror film that sits firmly in the torture genre, from what I can tell a family man is kidnapped by a crazed killer who tortures his victim based on the spins of a home made roulette wheel. I am not usually too keen on torture films, but there is the occasional gem.

Brutal starts A. Michael Baldwin, he was the main character in the fantastic Phantasm series of films and this looks to be his first film role since Phantasm IV back in 1998! The soundtrack also sounds like it should be good as it is composed by Alan Howarth who has worked on such horror classics as Army of Darkness, They Live, The Thing, and Poltergeist.

Back in July the film had been completed and the company were looking for distribution. The film is available to purchase from their website as well as a load of cool Brutal branded objects including rather bizarrely a potato peeler. Truth be told I don't know much about this film, what I do know interests me though.