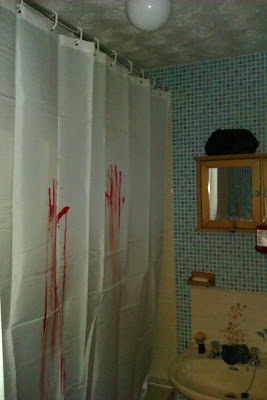 After quite an unplanned extended break I am finally back to once again take up the mantle of the Rotting Zombie. I have plenty to do, so much with lots of people patiently waiting for me to do posts about their films, books and more.

I got a load of horror films for Christmas including Day of the Zombie, Zombie Nation, The Zombie Farm and classic Jigsaw. I have yet to watch my horror films I got for last Christmas so a lot of catching up to do. Also got a bloody shower curtain and some blood based shower gel which has proceeded to leak everywhere!

Now for a small review of some deceptive cereal... 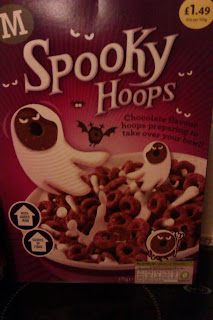 Chocolate flavoured hoops. Now these are called Spooky Hoops, I at first failed to see why.  Several days later it was late at night and I came under sustained attack by three seven foot tall Spooky Hoops. Luckily I had my friend Pint O' Milk with me, he soon made them soft enough to eat.

Rubbish! Actually this breakfast cereal was not the least bit spooky. Stop with the misnamed food products everyone!

I hope sometime this year to change my rating system to out of 10 rather than 5. Exciting news at The Rotting Zombie HQ.
Posted by Daniel Simmonds at 11:20