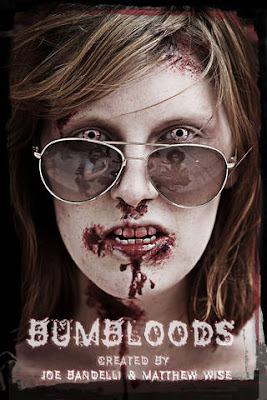 Back in October I heard word about a zombie mini series called Bumbloods which then promptly left my mind. The following month in November I happened to see two episodes of it at Zombiefest 2012. Now 3 months later I will finally stop being so damn lazy and do a blog post about the show!

Two room mates discover zombie apocalypse has happened in America. One is cool and calm, the other not so much. They team up determined to survive but is that possible?

Each episode is preceded by a minute long intro that is jarringly different in tone to the actual thing. The intro is serious and horror like but the actual episode itself is played for laughs such as the Afro haired guy shooting his house mates girlfriend dead and then telling him she had turned into a zombie, or the wimpy one rescuing what he thinks is a child to discover it is actually an angry midget. Not bad at all for how short it all is.

The background often shows cars driving around, and even normal people walking around which would be down to the low budget and doesn't really get in the way of things, while the zombies are effective without being overtly made up. The 4 episodes can be seen below, check them out! Would be interested to see if a 2nd series is made as would love to see more of these.

Posted by Daniel Simmonds at 06:59