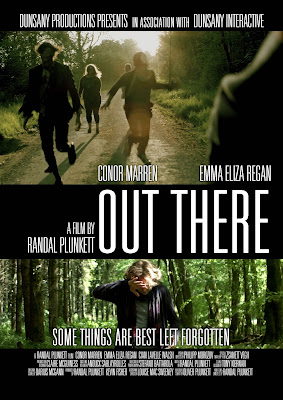 Out There is a short 16 minute horror film set in rural Ireland produced and directed by Randal Plunkett. Like many short horror films it concentrates on one character caught up in a nightmare situation.

Robert wakes up in woodland with a nasty gash on his head and no memory of how he got there. As he wanders the empty paths and roads looking for help he gets flashbacks of him and his girlfriend's deteriorating relationship. Just where has everyone gone? 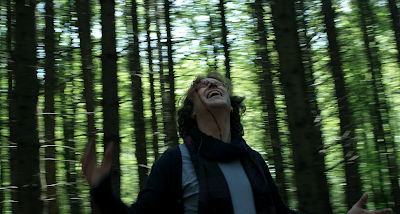 First off I have to note the quality of this film was terrible, it was constantly skipping and freezing making it hard to hear dialogue, and sometimes hard to tell what was going on. I was warned of this though as Randal said that unfortunately his bad Internet connection meant a better version was not able to be uploaded. Due to that I am not going to mark it down for this.

For the most part the film follows Robert on his lonely journey to get help, the location brings a lot of unease, everywhere is just too empty and quiet. A noisy generator at an abandoned farm, a house covered with graffiti and disturbing photos, long silent roads; you get a real sense of a hidden menace here which gives Out There a lot of atmosphere. What I love about short horror films is how they use the limited time to really make a solid little story (when done right). I was intrigued to find out what had happened. Connor Marren gives a solid performance as the confused, lost Robert, while his girlfriend (Emma Eliza Regen) appeared to also give a good performance though it was hard to tell due to the freezing and skipping usually when she went to say anything.

Interesting, fantastic locations and does not out stay its welcome being a perfect length for the type of story being told. A good twist for the end even if it is shown on the films poster!