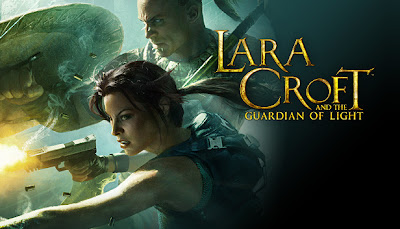 Lara Croft and the Guardian of Light is a spin off of the Tomb Raider series. It plays out like a 3D isometric action game but also features plenty of puzzles. The game is designed with co-op in mind, I was lucky enough to get to play through this as it was meant to be played (for a pleasant change!)

Lara has journeyed to a remote temple on a quest to find the legendary 'mirror of smoke'. She finds it but is ambushed by some local thugs who unwittingly unleash an evil spirit from the mirror; Xolotl the Keeper of Darkness. This mistake also brings to life an ancient warrior; Totec the Guardian of Light. Lara teams up with Totec to pursue Xolotl through the ancient ruins as if he is not defeated before dawn he will unleash hell onto the world. 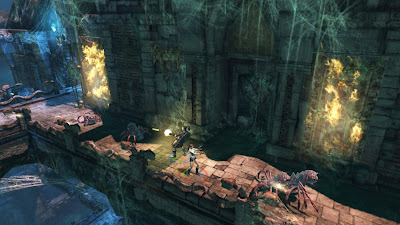 I had a lot of fun with this game, mostly due to the fact that I got to play it in co-op. For nearly a decade now I have been missing out on co-op games due to not knowing anyone interested in playing them but that has changed now. One character plays as Lara, the other as Totec. Both characters have different abilities. Lara has a grappling hook that can be used to climb up ledges, or for Totec to use as a tightrope while Totec is able to fling spears into walls that Lara can use to climb, and he also has a shield that can block projectiles and be held above the head to allow Lara to use it as a platform.

Don't come into this expecting pure action, being associated with Lara Croft it is no surprise that there are many environmental puzzles to solve. Some of the levels are built around this, such as ones where you have to locate boulders to activate a gate, while there are plenty of spike traps, locked gates, timed based switches and flame obstacles to avoid and puzzle your way through. Co-op really comes into the fore here, bouncing ideas off of each other to solve the many puzzles gives a real sense of satisfaction. It helps that most the puzzles are contained to set areas of the levels so you never really feel like you don't have all the necessary tools to do the job. 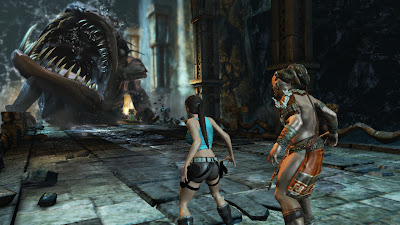 There are plenty of enemies in the game to defeat with the many weapons you find. You get everything from flame throwers to machine guns, rocket launchers and shotguns. These all have limited ammo but the default weapons of spears for Totec, and Laras iconic twin pistols are infinite and they also have access to bombs.  For the most part you battle demons of various elemental types as well as monstrous animals like crocodile creatures and wolf things. Spiders appear in abundance, their arrival on the scene was quite panic inducing as they literally poured out of a newly opened doorway engulfing my co-op partner (quite amusing). There are a few boss encounters throughout, none of which are that exciting or hard to defeat. Nice nod to the Tomb Raider games with a T-Rex being one of the bosses. Has to be said the story is very bare bones, has some nice comic book style cutscenes but it is just an excuse for the game world to exist.

There is a lot of variety to the levels, more than I expected to be honest, you have tombs obviously, but also various other locations including lava caves, lush outdoor areas, and my favourite one; a giant swamp, these all look pretty decent. Included in these are many hidden items that increase your ammo and health as well as relics which give you bonus to defence, your bombs, strength etc. Challenges often pop up (such as finding hidden spider stones or killing a certain enemy type) that also reward you with upgrades. My favourite and most frantic parts of the game are urgent chase sequences where the level is collapsing under your feet and you have to quickly charge headlong with fireballs, spiked balls and other dangers falling all around, very funny to get through in co-op. 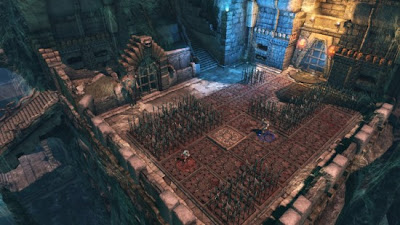 At around five and a half hours it is a decent length, each level on average half an hour long. There is never much danger of dying as check points are frequent and as long as your partner is still alive you can rejoin the game after a brief wait should you perish. This was far more enjoyable than I ever expected, for single players I would knock a zombie head off the score though.

Posted by Daniel Simmonds at 09:31