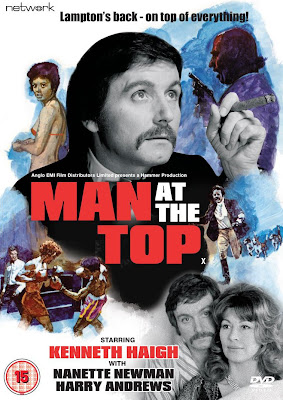 Man at the Top has been re-released as part of The British Collection which is a series of cleaned up DVD versions of cult British films. Not a horror, barely a thriller this none the less was a film that I found to be quite interesting even if a bit tenuous to be featured on The Rotting Zombie.

Joe Lampton is a no nonsense business man obsessed with money and power. Having gotten a well paid job as managing director at a pharmaceutical company run by Lord Ackerman Joe is at first pleased, but upon discovery that the previous person to have his job committed suicide he soon realises he may have become a fall guy for some dark secret. With attack as his best idea of defence Joe aggressively sets out to find the truth and save himself. 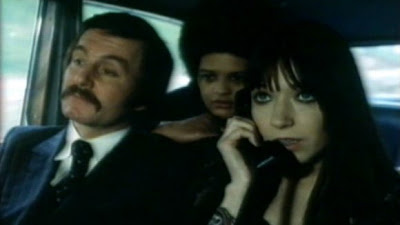 This is very much a film of the 70's, characters have ridiculous facial hair, terrible dress sense and the acting is all very serious and determined. Joe himself (played by Kenneth Haigh) is a very confident idiot. He is a Northerner from a poor background and looks in disgust at the people he is now associated with (the middle class). The main focus of the film is on class wars, the difference between the haves and the have nots. A bizarre, long middle section of the film ignores the main plot and instead focuses on Joe and two girls who he picks up hitch hiking (during a highly sedate chase sequence). During this time the film focuses on ambition and how Joe's world view is at contrast to the common folk who are happy with what they have. He knows he has to be tough to succeed, he is a success but even he admits he is not at all happy.

There is a faint vein of thriller running through Man at the Top but it teases, never coming to fruition. As mentioned the chase sequence is very tame, though there is an awesome almost The Wicker Man style sequence later on. After sleeping with Lord Ackermans daughter in the middle of a fox hunt she steals his horse leaving him to wander the fields back to Ackermans mansion. Over the hill in a big field comes Ackerman, his daughter, and a host of riders, along with a pack of dogs. Joe quickly realises they mean to hunt him, planning to kill him for the damaging evidence he has uncovered, after an admittedly intense chase sequence it just ends, Joe giving one of his never ending speeches about how he is never going to bow down to the man. Was a very good part of the film though. 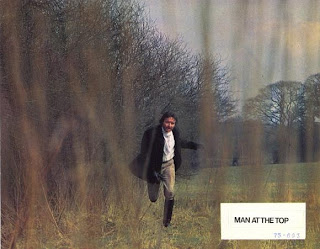 This is the best looking 70's film I have ever seen! Crisp, clear and with beautiful audio this is high quality. It is not horror, it is not even thriller (much) and sure maybe it does not belong on this blog, but Man at the Top was an interesting slice of 70's film making, feels very much of it's time, just was too mild and the tension never leads to anything.