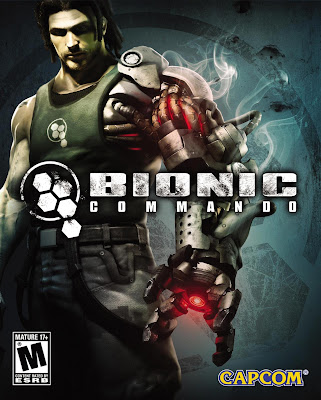 I picked up Bionic Commando a few years back for dirt cheap, as it is the bank holiday weekend (not that it makes a difference as I don't work Mondays anyway) I decided to plough through the game.

Working as a sequel to Bionic Commando Rearmed 1 and 2 this sees you playing as Nathan Spencer the hero of those games. He has been imprisoned for the last 5 years after bionics become made illegal. On the way to be executed (no idea why!) you are instead given a reprieve in order to help the FSA government defeat the pro-bionic terrorist group BioReign who have decimated Ascension City for reasons unknown. If Spencer completes his mission his handler 'Super Joe' promises to give him info on his missing wife's location. I had heard how terrible the plot twist was in this game, it is truly hilariously bad, I will say that much! 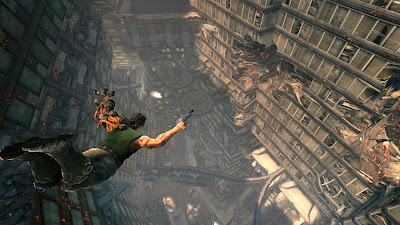 Bionic Commando is stupidly serious and 'gritty'. Giving such a bleakness to the characters does nothing but leave me cold, is really quite silly how 'emo' everything gets. Nathan Spencer is moody, unlikeable, miserable and a complete dick, not a pleasure to be forced to be that character. The people on his side are all horrid, horrid people, Super Joe and his superior both just laying into Spencer constantly saying how useless he is. The enemy characters are barely in it enough to even have any sort of personality to them. The commander of BioReign had virtually no screen time and a woman Spencer used to know who now works for the enemy is just awful, full of as much angst as him.

This came out at a time when it was unconsciously decided to make every single game full of muted dark browns and greys. As such the game looks supremely bland, there are city streets, caverns, woodland areas and docks but all look very plain and bizarrely large in scale. This would be good but there are invisible pockets of radiation that kill you immediately should you accidentally go into them which means for the most part you are funnelled down levels that look giant but are actually very condensed. This is woven into the plot as is the fact that if you go in water you very quickly drown. Maybe good if you fall in deep water but on more than one occasion I fell into water that came up to my waist yet I still drowned as if fully submerged; just damn annoying. When killed the ragdoll animation as your corpse flings itself across the game world at a hundred miles an hour got to be very irritating also. 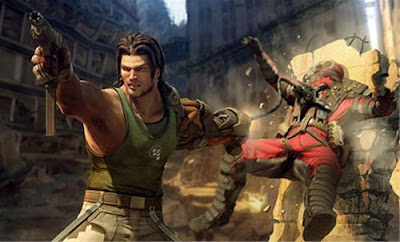 Where Bionic Commando succeeds is making you feel like a powerful almost super hero type character. Your left arm is robotic and able to be used as a grappling hook, swinging around the levels is fun and the abilities you have to destroy opponents are really quite fun. You can throw objects as large as cars at enemy soldiers, you can use your grapple to grab enemies, or spin it around like a whip to take out multiples at once, or just equip yourself with a limited use super weapon (homing missiles, grenade launcher, super machine gun,  or shotgun) and blast the hell out of everyone.

Most levels seeing you swing from bit of scenery to bit of scenery, usually towards a marker on your map which will either be the exit, or a homing beacon thing, hacking which opens up more of the level. A lot of times all enemies must be killed to proceed past electric barriers. A lot of the levels are very short, you can swing across them very quickly to get to the long load for the next small section of game. The engine apparently cant cope with interior levels well as there are virtually none in the entire thing and the ones you do get are very small. Also I must say on one occasion when there were too many enemies on screen the game crashed, not impressed with that! 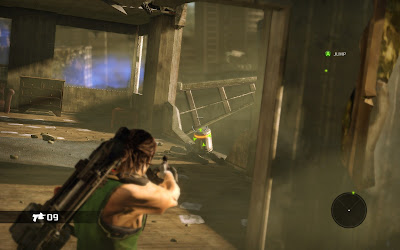 For the most part you fight weedy soldiers but on occasion you fight enemies piloting mech suits of various kinds. The mechs are a lot of fun to fight, satisfying to knock bits of weapons and armour off of them and then used the fallen object as a projectile to damage the mech more. Boss fights are infrequent but I had fun with them.

In general the combat is good, certainly the best part of the game but all too often it is the miserable storyline and bland locations that just drag Bionic Commando down. If it had just been more light hearted, not as much angst and swearing and more effort made to give the game a unique feel rather than just another brown and grey shooter, albeit one with a cool grappling hook ability then this could have shined, as it is it just doesn't, not at all.