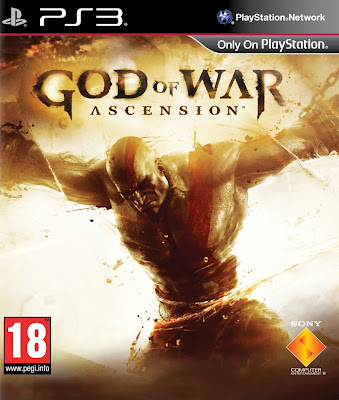 God of War III has sat on my shelf waiting to be played for years but never has as had not got around to doing God of War II, anyway I decided to get all the games in the series (minus dodgy mobile game) to play through them all. God of War: Ascension is the latest one to be released, but the first one chronologically.

Six months after Spartan warrior Kratos was tricked into murdering his wife and child by Ares the God of War he is rapidly going insane, plagued by illusions created by the Furies; the guardians of honour who are tormenting Kratos for breaking his oath of allegiance to the War God. Orkos the oath keeper visits Kratos and informs him that there is a way to forever stop the visions and to break the hold the Furies have over him. As the warrior hunts for the means to save his sanity the Furies in turn hunt him down in order to get him to serve Ares once again. 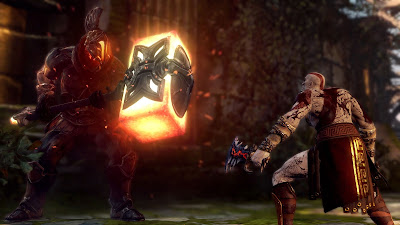 Ascension like the others before it is a 3D adventure brawler that sees you as Kratos violently battling a series of mythological monsters through a slew of fantastical locations. I thought QTEs (quick time events) were a thing of the past but it turns out they are still going strong here. Many enemies can be finished off with these sequences, while this is mandatory for defeating the bosses. Once you get the hang of them they are not too difficult so are just about excused here. I always feel these games should roll round many different places but here as before a few large ones are used. The Furies prison of the damned is built on the gigantic being Hecatonchires and so the level itself moves around as the giant attacks you. Later on you explore the statue of Apollo which is a huge construct, and an early level in the mountains with huge mechanical snakes was also cool. Locations all look great, there are not really any boring levels, maybe the village you initially start off in.

Fixed camera angles mean sometimes it can be difficult to work out where you are meant to be going in levels, simple puzzles of the switch and moving block variety break up the action and can be satisfying to solve though sometimes a hint as to your general goal would have been helpful. The main meat of the game is the vicious combat. 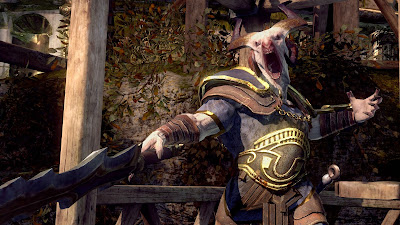 Kratos is armed with the Blades of Chaos (basically swords on chains) and through the course of the game he gets access to 4 elemental powers of lightening, ice, fire and souls of the underworld...yeah I realise that last one isn't actually an element. Later powers give you the ability to summon a shade of yourself to fight alongside you, as well as a device that freezes enemies and one that repels them. Powers can also be used to solve puzzles. One such power can reconstruct destroyed objects such as broken bridges and crates, while your shade can be used to activate switches. All these items can be powered up by collecting red mana from chests and defeated enemies, not too hard to level them all up to their fullest.

All enemies are finished in super brutal ways; centaurs have their insides ripped open, medusas have their heads sliced open while the poor elephant men end up on the floor with their exposed brain quivering. Heads, bodies, limbs are ripped off, faces are stamped on, monsters get impaled with their own appendages and eyes get torn out. Super violent, channelling the spirit of man indeed! Very satisfying to dismember your mythological foes like this. Bosses occur every now and again and are fun to fight; Furies, a giant Kraken, and a Chimera to name a few. 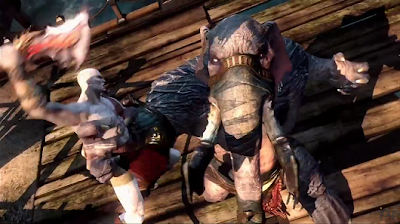 The plot of Ascension is basic but functional, what I did like was how it is set in both the present and the past. Present Kratos is battling his way through the prison of the damned having escaped his chains, while past Kratos goes on his grand journey. Was interested to know how he came to be captured and the voice work is pretty good with some nice looking cut scenes but certainly nothing memorable. This goes for the plain music as well; just loads of chanting and stuff like you would find in any fantasy game.

Not a bad game, I had fun with this despite occasionally getting lost (due to my own incompetence) and many times dying due to missing QTE's or accidentally jumping off platforms to my doom. Onto the next in the series which I believe is God of War: Chains of Olympus.