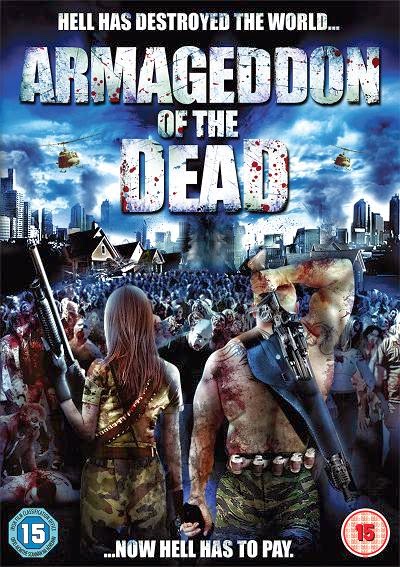 Armageddon of the Dead is the third in the trilogy of zombie films my best friend lent me. Now I am utterly sick of zombie films dramatically lying on their covers to try and sell a film. For whatever reason most zombie films feature a cover that has a burning city along with thousands upon thousands of zombies. This one has perhaps the most ridiculous one yet, I am more than half convinced it isn't even the right cover for the film, I mean look at it! The tag line is 'Hell has destroyed the world...now Hell has to pay" Really? Really?! Nothing relating to that damn cover, or that utterly unrelated tag line has anything to do with what happens in this film!

Jenny and Sam Mills drop off their young child at Jenny's parents house one seemingly normal evening. Returning home they go to bed, while Sam's troublesome younger brother sleeps on the couch. The next day Jenny heads out to do some shopping when she realises zombie armageddon has begun (due to a train carrying dangerous chemicals derailing near the town). Racing home to warn her husband she finds out him and Nick have already encountered the dead. Together they head to her parents house to get the daughter, but the house is empty. A radio station informs them to head to their nearest community centre to be evacuated, so there they go hoping to find the kid. 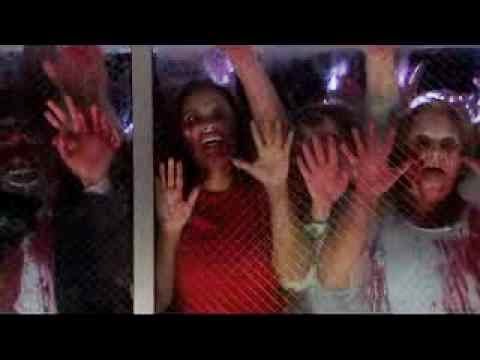 Wow, this film is a true stinker, a real chore to watch. Now zombie films can be bad and still have redeeming features, but this is just plain bad and really falls on the boring side of badness. For whatever reason every single scene feels really, really long. Early on for example Sam has barricaded a zombie in his bathroom and is desperately calling for Nick to wake up and come help him, this whole scene should have been over in moments yet I could swear it was at least five tedious minutes it went on for. This happens again and again, what should be brief and poignant scenes drag into tearfully agonising eternities as the convoluted and stodgy script calls for characters to just drone and drone on at each other in the most soul sucking ways. The script is awful, no amount of acting can make what the characters say seem at all natural.

No one seems to be into their roles, the couple searching for their daughter acts as if it is a set of keys they have lost, or that they have mislaid their phone, no sense of urgency, pretty much no emotion is summoned by either actors. Hard to root for people who come across as sociopaths! The character of Nick (played by Jason Harper) is designated as comedy character which fits very badly into this realistic world director Damon Crump is attempting to create. Issues such as racial tensions, and the power of the military is extremely ham fistedly jammed into the film, terribly and unsubtly done. Zombies are really not well treated here, some look great, some have really cool prosthetics on them to make them look really messed up. It is so patchy though, most the zombies just seem to have had some fake blood flicked on them, or blue veins painted on to the sides of their faces. It is so inconsistent that I wonder if the people playing the zombies were asked to provide their own make up. Scenes that involve a crowd of zombies really demonstrate this lack of clarity. Some have no pupils, some look wild eyed, others look and act normal as if they were not aware they were meant to be zombies. The one good thing about these undead is that there are a lot of them, or seems to be in places.

What if anything does Armageddon do right? They have ruined streets down with plenty of smashed and empty vehicles. I also get the sad impression that it is kinda a realistic impersonation of what a real outbreak would be like. Everyone is panicked and useless, arguing, or sitting in mute silence, and unprepared to be able to fight the dead. Old tropes rear their ugly heads. People who refuse to believe their loved ones now visibly transformed into drooling flesh hungry ghouls are actually infected at all, zombies who walk around with their arms out straight in front of them and, cars that conveniently run out of petrol. No one knows to aim for the head, and no one knows a bite will result in being turned, so unlikely!

A somehow boring film whose low budget destroys any of the set pieces it tries to create. This has been done a million times better in a million different films. Avoid like the plague! To end; apologies for the terrible images, I really need to start taking my own pictures for my reviews.