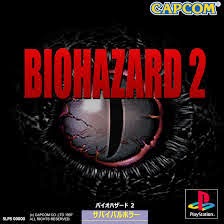 I was reminded of this a few days back and so thought I would do a small post on it. The Resident Evil series of videogames are heavily based on the films of George Romero and so when he was hired to make a trailer for the Japanese release of Biohazard 2 (what the series is called in Japan) it kind of made sense.

The trailer is low budget but has some decent moments in its 30 second run time featuring main characters Leon Kennedy and Claire Redfield as well as a bunch of zombies in a Police Station. I have included this trailer below, is worth a look, after all Resident Evil 2 is the best in the series.

Interestingly Romero was later hired to write a script for a Resident Evil movie. To prepare he had an aide play though the first game while he took notes. The film was to be based around the idea of the first game. However Romero was fired as it was felt his script didn't really fit what a Resident Evil film was envisioned to be. I seem to recall reading at the time that his script was for a much more zombie focused piece than Capcom were looking for. Judging by the terrible Land of the Dead (sorry Lucinda, no matter what you say this film sucks!) and average Diary of the Dead and Survival of the Dead then maybe the right choice was made.
Posted by Daniel Simmonds at 11:14