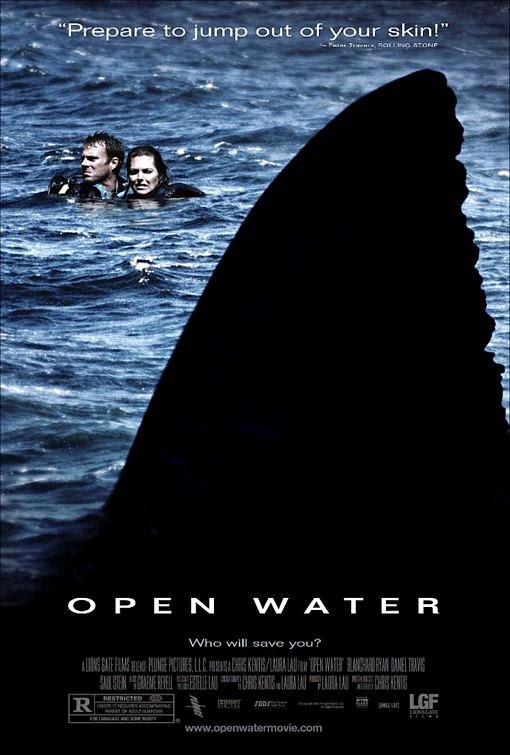 The problem with most horror is that it is not really 'feel good' stuff to watch. I decided to watch Open Water which turns out isn't really horror and is more of a survival/disaster film but also was not 'feel good'.

Daniel (Daniel Travis) and his girlfriend Susan (Blanchard Ryan) head to the Caribbean on holiday to do some scuba diving. They head out to the middle of the ocean with a scuba group. Due to an incorrect head count the couple are accidentally left behind, they come to the surface to find the boat gone and their troubles only go down hill from there.

The basic plot for Open Water is actually based on a real life event that took place in Australia. The reason for being abandoned and a bit later on in the film use what actually happened as reference points. I don't know why but I figured there would be more of a horror slant to this. The quote on the front of the DVD box reads "Blair Witch meets Jaws' which made me figure some sort of supernatural type goings on. Meanwhile the blurb on the back of the box makes it seem like the two are at the mercy of nefarious people who are purposely playing with them. The truth is far more mundane.

The problem with having a film mostly shot in the middle of the ocean is that there is not a lot to look at. Even at a 77 minute run time I was done with it all ages before the end credits roll. It doesn't help that due to not actually being able to leave the actors all alone the shots used are all quite close up and you never really get the impression there is not a boat a few metres out of shot (which there would have been for the actors safety). The part of the sea they are in is quite busy so there always seems to be boats just out of reach and planes flying over to keep making the characters have hope.

Once the couple find themselves stranded the film seems to loose steam. Lots of things happen to the hapless duo to keep things interesting but it seems like a check list of problems is being crossed off. Jellyfish sting them, they get attacked by sharks, they fall asleep and drift off from each other, they argue with each other but these events all unnaturally flow together. You know things are not great when a mid film highlight is a character puking up.

Lots annoyed me about Open Water. Susan doesn't realise sea water is not a wise thing to drink for one; really? That completely baffled me and seems like it was put in as the script writer thought the audience would be imbeciles and so wouldn't understand why the two were dehydrated with all the water around. A lot of the scenes have something happening underwater and so one of the characters would have to wet their goggles, put them on, swim down, see the problem and come back up to explain to the other character. That got tiring fast and must have happened at least seven or eight times. On the subject of pointless things early on there is an aborted sex scene which I am certain was just put there to show Ryan's flesh off for some lazy titillation, this was just not needed. 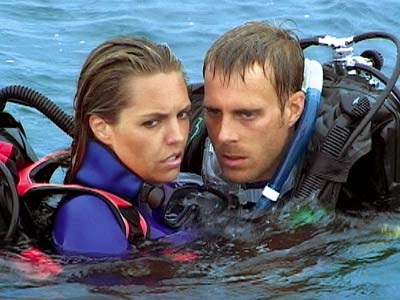 The plot is unavoidably thin, it irritated me that no one would realise the two were missing but I guess as that was the part of Open Water that was based on true events it is hard to complain about. If I was given the film and asked to make a more streamlined version then I reckon I could easily cut it down to 10 minutes. The camera quality was also not the best, a lot of it, especially the land based sequences look like they were filmed on hand cameras, at least the special effects were all real and not CGI based.

When it comes down to it, no matter how awful being in that situation would be in real life, watching two annoying people floating around being miserable for an hour does not make for great entertainment. In the end it all seemed just a bit pointless.