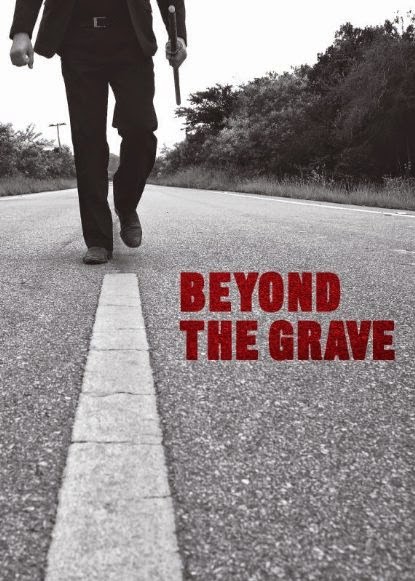 Beyond the Grave is a Brazilian post apocalyptic zombie film that has won 14 international awards and been selected for over 80 film festivals world wide. I call it a zombie film yet these undead ghouls take a backseat to what feels like a Mad Max/Western mash up.

After the seven gates of Hell opened up and unleashed the living dead onto the world mankind fell into ruins. In this dead world  Rafael Tombini stars as an unnamed police officer who is still trying to do his job. He is hunting a supernatural figure known as the Dark Rider who not only may be responsible for unleashing the apocalypse but also has ties into the Officers past before the world ended. His travels lead him to a small group of friendly survivors but when their safety becomes threatened he sets off on a path of revenge. 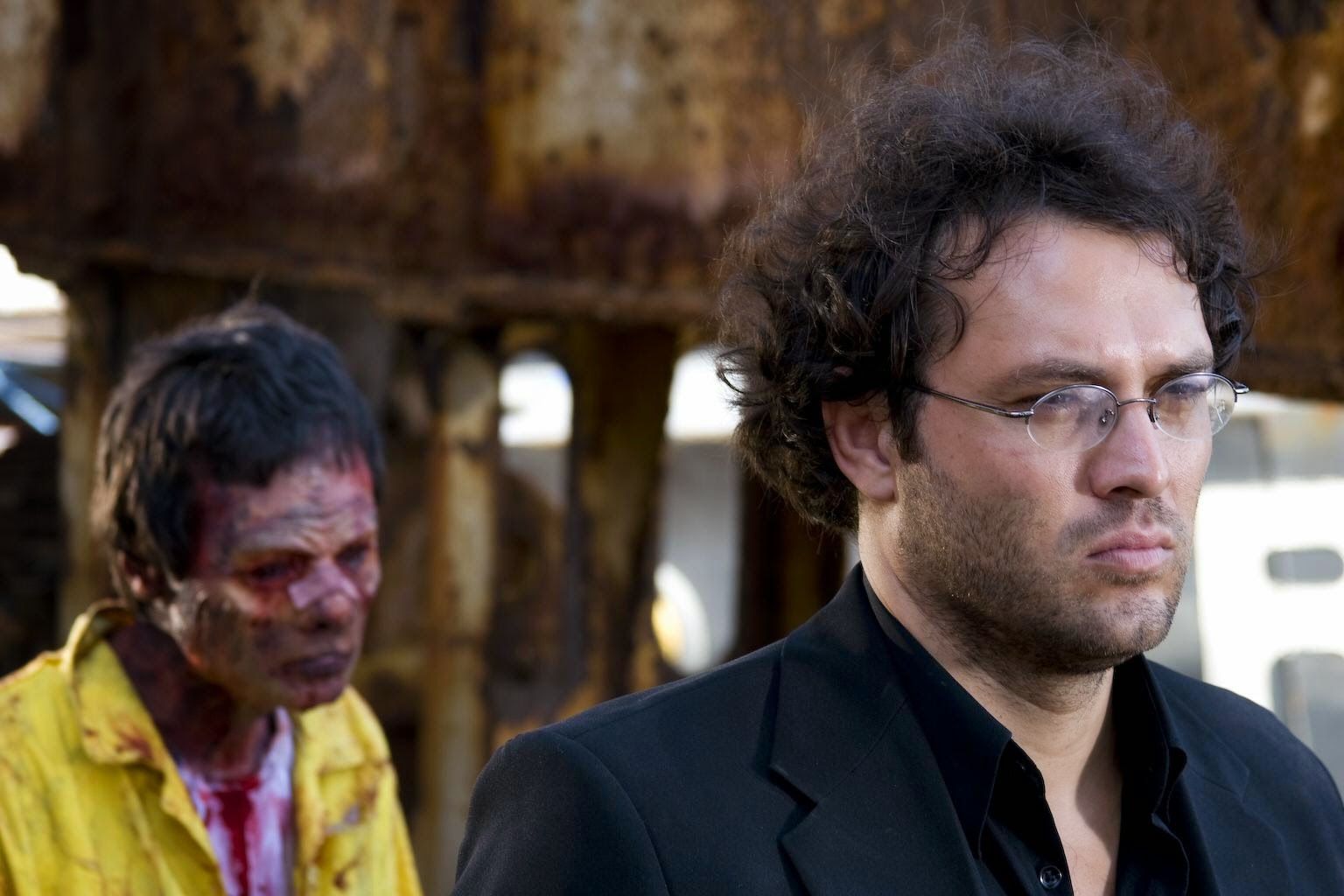 Beyond the Grave has a lot of trappings of the Western genre. From the nameless hero who is too busy with his mission to be a good guy to the mournful music and long shots of empty vistas (usually an unending road here) as well as slow action scenes Officer is like a modern day Clint Eastwood, albeit one who wears a black suit and wears a cracked pair of spectacles. Only talking when necessary and armed with a samurai sword and pistol he is an interesting character and one who spends the film with a bullet less gun (after using all his ammo in the intro sequence) that makes for some interesting scenarios. His opposite; the Dark Rider dresses like a cowboy and wears a gas mask. This being of evil is able to come back from the dead and is armed with a gun that fires bullets made from bones. Out of all the characters in the film these are two who really stand out being polar opposites of each other and both fixed with a drive to defeat the other.

There are quite a few zombies to be found here but they pose such little threat that no one really takes them seriously. They move painfully slowly and often don't even seem interested in the living though their bite will turn one still. With the supernatural element it is suggested they go wherever the Dark Rider goes but they are figures of pity more than of dread with the Rider and his lackeys who are the real monsters of the film. 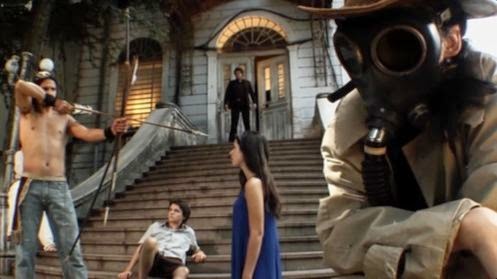 The Kill Bill style story of revenge is quite well handled and gives drive to root for Officer, a mid film plot twist I did not expect and really was quite brutal and unexpected. The middle of the film has a short interlude set before the apocalypse which was a nice buffer for the 90 minute piece while either side is lots of mournful silence and driving around punctuated with lo-fi action set pieces. The bad guys all have distinct looks to them and there are some interesting ideas used. One of the bad guys is armed with a harmonica that plays a note that makes peoples ears and eyes bleed for instance.

While in Spanish there is not too much dialogue to begin with anyway. There are musings on the futility of living and the lack of trust in the world now that no one can really be trusted, while the best parts come as Officer is driving around in his cool looking car and a lone radio station broadcasts music inter cut with a man talking about his sad past and how the world has ended. This radio is used to flesh out the back story of the world in a more natural way than characters suddenly mentioning the cause. 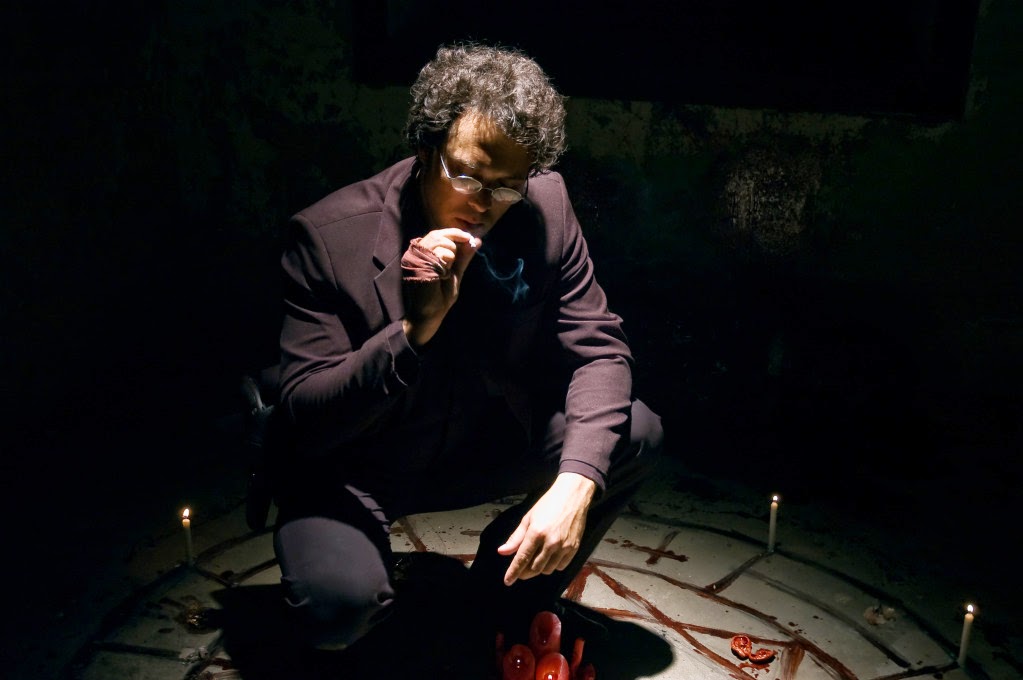 The film has quite a low budget it seems but this works for the wasteland where the only places visited are dilapidated, blood smeared buildings and special effects are practical ones that just gave me a nostalgic hit of 70's and 80's exploitation films. My only real complaint there is that a crossbow that is used quite a lot is completely silent, at times I got briefly confused when people fell down dead until it showed the close up shot of a wooden bolt sticking out of them. A big finale that I was looking forward to (and turned out not exactly the finale) was over all too quickly and left me a bit disappointed. The characters all seem fine, there was no one that particularly seemed terrible, was just a shame that the English subtitles were not perfect and so sometimes I had to translate in my head what was actually meant to be said.

Beyond the Grave was an interesting piece, very different to the norm and I loved how the zombies were handled with them seeming like victims rather than true monsters. A sombre look at the fate of mankind with a great soundtrack. This is currently free to watch on Hulu USA.

Posted by Daniel Simmonds at 04:09