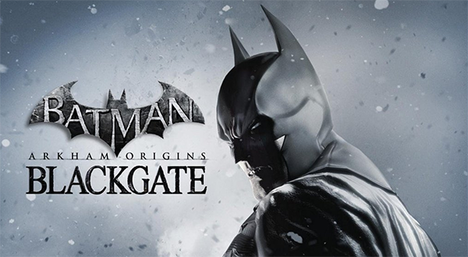 Don't ask me how I came to be reviewing all the Batman Arkham games on my blog, occasionally they have horror elements to them I guess. With all the main line games reviewed I find myself left with the downloadable companion game to Batman: Arkham Origins.

Blackgate takes place three months after the end of Origins and starts with Batman encountering Catwoman for the first time, they fight and after capturing her she is sent to Blackgate prison. A few weeks later Batman learns there has been a riot at the prison, all the staff have been taken hostage and three super villains have taken over parts of the complex. Black Mask's turf is the industrial complex, Penguin rules over the prisons, while Joker is in control of the administration block. After arriving at Blackgate Batman forms an alliance with Catwoman who tells him the staff are being held in the Arkham wing and to get there he is going to have to battle everyone. 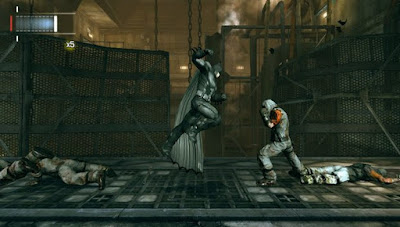 I had muted hopes for this game but I still had hopes, I loved Origins so hoped this would at least manage to capture some of the magic of that. The game is a Metroidvania 2.5D  explorer with you able to tackle the three areas of the game in any order you choose, though the plot will eventually lead you to all three regardless. As you progress the main story you unlock new abilities that let you get to previously inaccessible areas. One thing the game does right is giving you the freedom to do either of the areas first. The three main bosses can be battled in any order with the ending changing slightly depending who you were last to defeat.

My initial complaint is just how dull Blackgate looks, the levels are grey and dreary and ooze a level of blandness that made everything look all the same. The administration block is the most varied due to Joker's graffiti everywhere but even that is dull as dishwater. There was a similar problem with Castlevania: Mirror of Fate that seemed to think that turning a third person battler into a side on game meant locations should be passable but with no love given to them. This is not helped by the confusing map screen that makes it hard to get your bearings and the fact that the 2.5D perspective means often you view will switch round so a simple walk down a straight path will take you all over the shop. 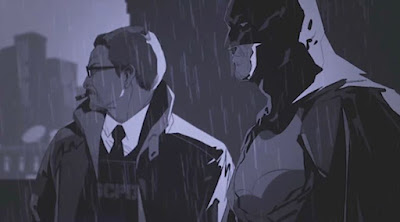 The combat is ok, your attacks seem to have no weight behind them but other than that they are fun enough with combos you can do and slow motion finishers. Later in the game regular enemies suddenly become invincible with no warning or explanation, it was only after many many trials and errors that I realised they were wearing explosive devices on their backs; a single line of text on the screen to tell me this would have been enough rather than just expecting the player to know from constantly getting killed seemingly at random.

The bosses are all different and all require different ways to take them down but again this led to huge frustration as again regular attacks inexplicably just didn't work. An example is the Penguin boss that requires you to get above him and kinda jump on his head; this method takes off a bunch of his health bar, should you get to him any other way though your attacks just don't register and you get instantly killed; very frustrating when you don't know why, again a single bit of text could have prevented this annoyance. 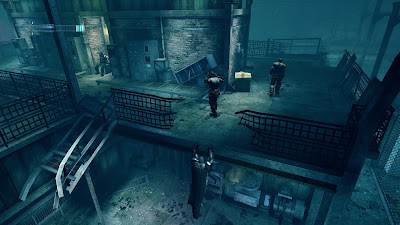 Your tools and gadgets can be used on the environment to say blow open a hole in a weak wall, or electrify a junction box, all good in practice but first you have to go into detective mode and slowly scan the environment which takes a fair few seconds, once again this is an annoyance when it is blatantly obvious what you need to do but the game forbids you until you jump through its hoops. Talking of level design a lazy way to prolong the games conclusion later on gets you sent on a tedious fetch quest back through all the areas of the game. This was an archaic method that did nothing to improve my enjoyment.

The plot is bare bones and dull with characters acting out of...well character, it all ends badly too with the final boss pretty much being a rehash of the very first boss and no harder at that really. The plot is told via comic book cutscenes which are ok I guess but look a bit amateur though the voice acting isn't bad. There are side missions that involve scanning items that appear as question marks on your map, these result in a few lines of text explaining bits of the games back story. There are also collectable items for you to destroy as well as power ups that increase your health and give you different suits. None of these were interesting enough for me to see to completion. 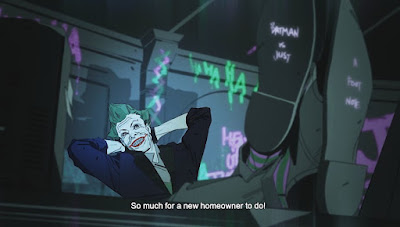 Overall I was disappointed with Blackgate, I didn't expect it to be mind blowing but I at least hoped it would keep me entertained for at least a moderate chunk of it's six hour run time. Maybe one to avoid as it doesn't really bring anything to the series.

Posted by Daniel Simmonds at 12:39