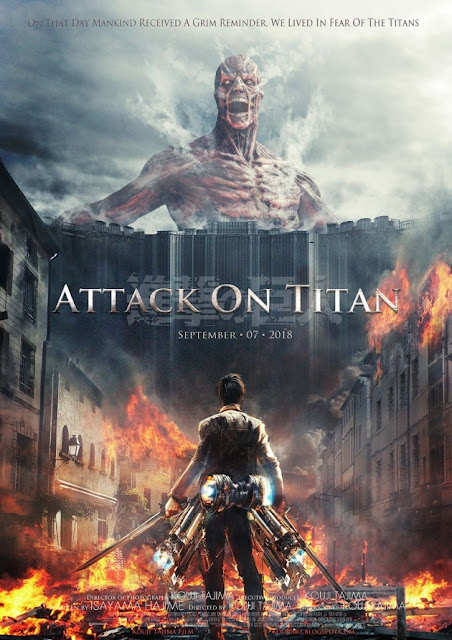 I did a review of the Anime series of Attack on Titan last year and so after watching the first live action film last night I thought I may as well do one for that too. Since coming out I have heard mostly negative reports about the quality of the movie but I wanted to see for myself, especially as while I like the Anime I am not in as much love with it as many fans seem to be.

In the world of the film humans live behind three gigantic circular walls that were built hundreds of years in the past as a means to defend humanity against the might of the Titans. The Titans are huge humanoid monsters who exist only to eat humans and have not been seen for a hundred years, and so are almost a myth. Eren (Haruma Miura) and his friends Mikasa and Armin sneak out to the outer wall but while they are there a being known as the colossal Titan appears and destroys a part of the wall. In this gap flood an army of Titans who start killing all they see. In the chaos Eren looses Mikasa and it seems she has died. Two years later and all humans have retreated behind the second wall, Eren and Armin are now part of the military and are part of a task force tasked with travelling though the Titan infested lands in order to find a way to block up the gap in the outer structure... 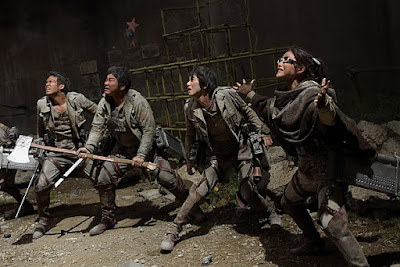 I wasn't expecting too much but I still hoped this wouldn't be too bad, unfortunately it is pretty much awful. A film covering this topic needed a huge budget but it is plain to see this does not, the Titans look fantastic but they never feel like they are in the same vicinity as the human actors, it sort of reminded me of the old giant monster films from the 1950's, this was off putting though as they looked so far removed that they looked like they were in completely different locations. The Titans are really freaky looking, much as they were in the Anime, they seem to be CGI'd up humans and were the highlight of this movie. The colossal Titan however looked pretty terrible, too much CGI is put on it with dodgy looking smoke effects. When the Titan's eat people again it sometimes looks a bit fake, an early scene where a soldier gets ripped into four particularly looked fake as anything. This does include a baby Titan which was very bizarre, and in the film the Titans are constantly chuckling which adds to the terror more than them being silent in the Anime.

Nearly every scene featuring Titans was pretty cool though, a great scene involving a church and a river of blood, as well as a fight scene between Eren and a group of Titans which was also pretty darn exciting. The maneuver gear the soldiers use to fight the Titans doesn't show up much, kind of a shame but at the same time the effects were not too strong for this key item either. 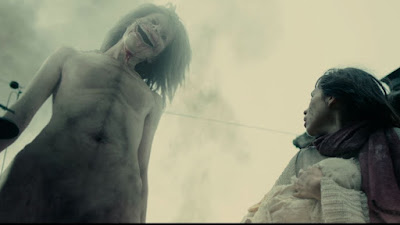 Outside of the Titan action scenes Attack on Titan: Part 1 is really dull with bland characters and lots of nonsensical lines uttered by the unlikable cast. No one seems like they were in the Anime and they have different back stories that I don't think should have been messed with. Eren is as miserable as he always was, though here he is a capable fighter rather than the loser he was in the Anime. Misaka starts the film far too emotional and girl like, it is only later on she is made into the bad-ass she always should have been. The motivations are all mixed up too, Eren doesn't see his mother killed (which was his main catalyst for hating the Titans previously) and the majority of the plot plays out differently. This is at it's best when it's aping the show, the finale is pretty damn good and it is no coincidence that this last part is also a faithful reproduction of the show rather than doing what the rest of the films plot did; spin out into something nowhere near as interesting. Misaka is given a love interest who pretty much acts for the most part like Levi (a key character who was cut for the live action adaptation), so that was weird (as was Eren's accidentally hilarious reaction to finding out), Eren himself nearly ends up sleeping with a female soldier which was really weird.

The show was bright and colourful but the film adaptation goes for what I coin 'nuclear Armageddon grey' with very muted colours throughout. The look of the world seems more old and less fantasy than that of the show, there are ruined sky scrapers, remnants of helicopters, while the soldiers ride around in armoured vehicles rather than by horse and cart. I liked the vibe but I just wish it hadn't all looked so drab and lifeless. That's the main problem with Attack on Titan: Part 1 as a whole; it just has no soul to it, I didn't care about any character at all, I didn't care about their mission, I didn't care if they lived or died, it was only due to wanting to see Part 2 that I persevered to the end. With such a seemingly bad group of actors I really am not holding out much hope that Part 2 can possibly redeem this hot mess, far too many times I was laughing out loud at scenes that I am sure director Shinji Higuchi didn't intend people to laugh at. 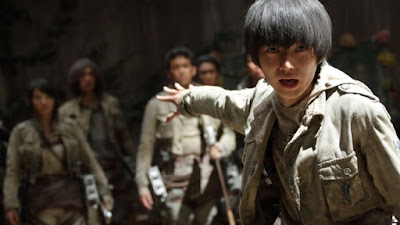 If your a huge fan of Attack on Titan you will not like this film, if your not a fan of the show or Manga this will be a confusing mess, this just doesn't appeal to either side and so I find it very hard to recommend. Maybe if you do want to see this then just skip to all the scenes with the Titans and ignore the rest of this snooze fest.