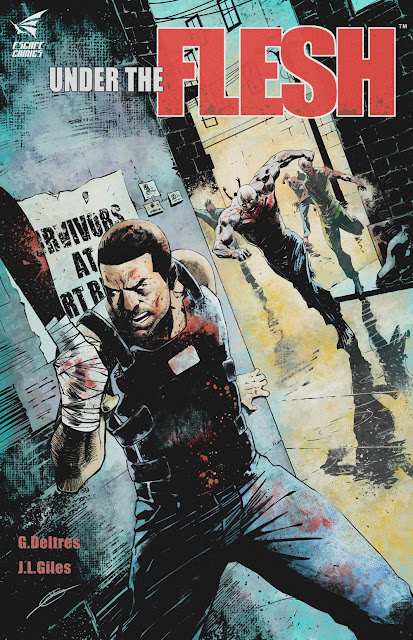 Under The Flesh is a zombie story with a slight twist, the creators describe it as 'Captain America born in a jacked-up, demon-possessed version of The Walking Dead, where only men are cursed!'. In the world of the comic zombie Armageddon has swept the globe but only males turn into the undead. These creatures known as fleshers are very deadly, even head shots don't stop them. Not intent to just eat their female victims they also it is suggested rape them also. In this doomed world super soldier Ruben Lobos exists, due to experimentation prior to the outbreak he has enhanced abilities and an immunity to the virus. In issue one his girlfriend Dinah left their hideout and so he went looking for her. Issue two had him discover a member of the National Resurgence Initiative while also coming under the scrutiny of a man who is able to control the walking dead...

For this third Kickstarter $1,000 was needed, but with five days still to go an impressive $2,183 has already been gained. While it has succeeded I still thought it was worth mentioning in case any of you want to also pledge some funds (a variety of incentives are offered on the page including exclusive covers and past issues of the comic). The art style brings to mind comics of the 1980's and there is plenty of gore and violence with heads and limbs flying frequently. So if this sounds interesting to you check out the Kickstarter page here.
Posted by Daniel Simmonds at 10:31