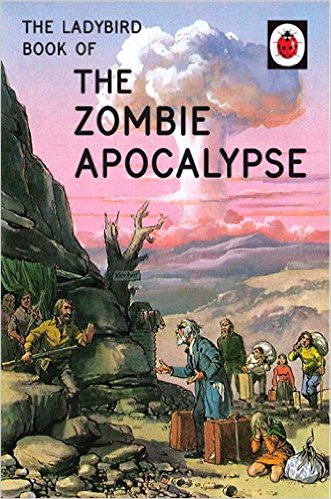 The Ladybird Book of the Zombie Apocalypse is an adult version of the usual Ladybird children books, it is set out as if it is written for children and as such there is not much to it, each double page is made up of a picture and some simple text, usually not more than a few paragraphs, and usually under fifty words. There are a huge range of these types of books, it seems they have been quite successful as new ones are always being released.

The intro blurb states: 'This delightful book is the latest in the series of Ladybird books which have been specially planned to help grown-ups with the world about them.
As in the other books in this series, the large clear script, the careful choice of words, the frequent repetition and the thoughtful matching of text with pictures all enable grown-ups to think they have taught themselves to cope. The subject of the book will greatly appeal to grown-ups.' What follows isn't a story as such, each double page deals with an entirely new situation and featuring new characters, nearly all are set up as jokes on the zombie apocalypse, and nearly all of them are actually pretty amusing. I don't know if the art was drawn especially for this as there are actually aren't any depicting zombies at all, some that are meant to feature the undead instead seem to have used art from a 'cowboy and indian' back drop. 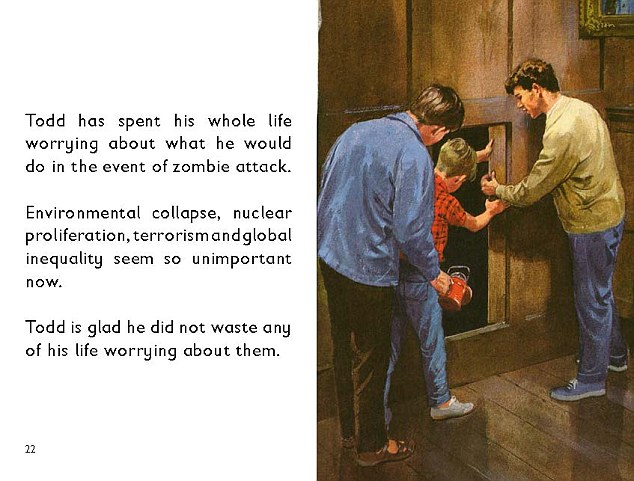 There are 24 of these double page spreads, the artwork is realistic rather than cartoony which helps with the absurdity of what is being talked about on the text side of things. As an example one part in simple language describes how minor crimes such as looting can be easily dealt with by neighbours working together, the accompanying picture is of a man hanging from a post with a noose around his neck. Throughout there are references to not only zombie films but also other post apocalyptic situations. One describes a Mad Max style world not being likely with the picture alongside it showing a boarded up petrol station, another one mentions a vegetarian being blinded while looking for food in a green house; a reference to Day of the Triffids. There are a few which miss, either I didn't understand them, or they just were not funny, overall though it's an entertaining read.

On that note though it is possible to breeze through this in under ten minutes, with a RRP of £6.99 that is not great value for money. However this is designed as a micky take of Ladybird children's books and so it wouldn't work if it had been bigger. Also it is high quality with a nice thick cover and thick paper. Personally I love it, it is a unique addition to my library of zombie books, and as it was a gift the relative high cost doesn't bother me.