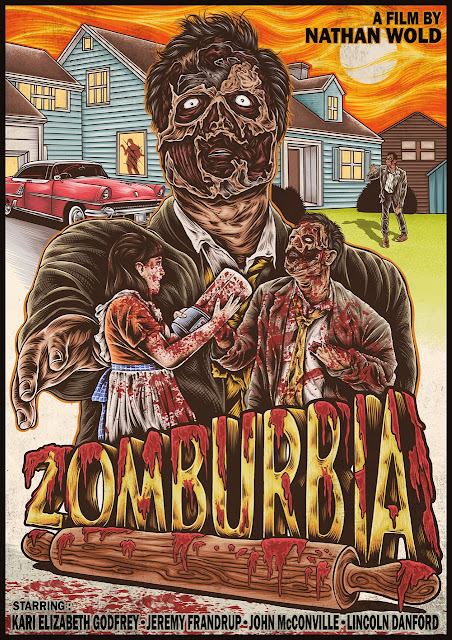 Zomburbia (written, directed and produced by Nathan Wold) is described as a zombie movie set inside a 1950's sitcom. At just over 7 minutes long there wasn't enough time to really get a concrete opinion of just how this feels, I enjoyed it, though it did have a few issues for me. It certainly has an attractive poster though.

Henry (Jeremy Frandrup) and Martha Mandrake (Kari Elizabeth Godfrey) are the stereotypical perfect 1950's husband and wife. Martha is concerned about their young son Raymond (Lincoln Danford) as he has been off his food, Henry is convinced it is down to drug use, but there may be a more ghoulish reason for Raymond's new behaviour...

I enjoyed the sense of place that Zomburbia creates, it has the feel of the 1950's with the husband and wife looking appropriately attired in clothing that brought to mind the look of the video game Fallout (thinking about it, with it's zombies this would have fitted in great with that universe!). Also added to this is both the period music, and the old fashioned way the couple communicate with each other.The music only plays at set points in the short which I felt added a lot, I felt the loss of music in the more quieter scenes made them seem more serious and less comedic as a result. While I liked the tone this went for the humour didn't completely hit with me, I felt the main joke being the couple don't realise the undead are zombies was over played in the two distinctly different halves. This almost felt like two shorts in one with the first part being about the newly deceased son, and the second half being about an intruder in the house, as such there was some slight pacing issues.

However, the film looks great with nice crisp images, while the zombie make up effects are brilliant, especially the child zombie (complete with baseball embedded in his skull), they had an effective looking grey skin colour, and I loved what they did with the eyes, kudos to the child actor for acting his part well, all too often you can see the excitement in child actors faces when they play zombies. Towards the end there is a neat little action scene resulting in a fun special effect that leads up to a great ending that felt very appropriate for the tone gone for, the look on Martha's face in the final shot is spot on.

So while Zomburbia did have it's issues I would say it is worth a watch for the zombie make-up effects alone, and I can't think of too many zombie films off the top of my head that take place in the 1950's, let alone in a 1950's sitcom, so there is that too. Zomburbia is playing (in competition) at the Phoenix Comicon on the 25th May in the 16:30 to 17:30 slot. Director Nathan Wold will be in attendance, if your in the area then be sure to check it out as it looks like the event has a solid line up of films being played, with the right crowd Zomburbia could pop.

Posted by Daniel Simmonds at 15:39