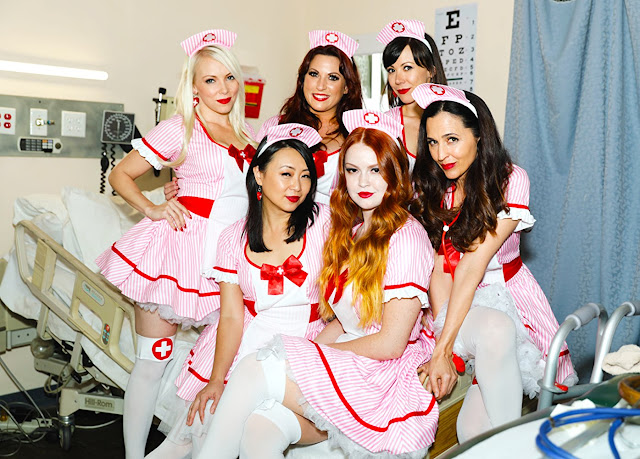 Blood Bride is a short 14 minute horror film that has been released to coincide with Women in Horror month which is this February of course. This was directed by Michelle Romano and written by Corey Tourigny who both also feature in the short. It was produced for the Annual Massive Blood Drive PSA as one of a collection of shorts curated by the Soska Sisters. So this functions both as a fun little horror, as well as bringing attention to the importance of donating blood.

Grant (Tourigny) is an anxious husband whose wife (Romano) is in hospital close to death. Dr. Baron (Robert Catrini) suggests to him the chance of a cure, but for this cure they are going to require lots of Grants blood...

This short is split into two different feeling parts. I loved the drama of the first part, the whole talk with Dr. Baron is done in silence with no music playing. I felt Catrini was the best thing about Blood Bride, he drew attention in every scene he appeared in and had one of the best lines said with malice. The second part becomes quite surreal as many inappropriately dressed nurses tease and toy with Grant before performing their sinister transfusion. This part didn't really make too much sense, though this is excused later on when context to this section is provided.

I enjoyed the general flow of this and how easily it slips into surrealness, the blood effects look good enough, while the acting I had no problem with for the main characters. Despite the simplistic story I enjoyed watching this, though for me Grant was a bit of a blank slate, possibly due to him being dizzy from blood loss or something, but his character doesn't really do much.

Blood Bride is due for release on February 19th 2018 at midnight on the Soska Sisters official YouTube channel, and ChicArt Public Relations are hosting a wrap party on Thursday February 22nd at 7pm at LONO Hollywood which is open to the public.

Mr. Simmonds, your kind words are most appreciated. Thank you so much. -- Robert Catrini

No trouble, I enjoyed the short, sorry it took me a while to see your comment!