Nightmare Boy is a platformer in the style of a metroidvania, that is to say the game takes place in one huge level with new areas opening up as you gain new abilities and collect items. At its heart this is a platformer, while you do get stronger there is no real RPG element to speak of. It was the visuals that appealed to me, that and the fact I darn love metroidvania games. However while on the surface this is an attractive looking game as soon as you start to play it you discover the many problems it has both in terms of level design, and how your character controls.

You play as a young boy named Billy whose pillow comes alive one evening while he is laying in bed. The pillow changes into an evil magician who casts a curse on Billy, transforming him into a monster before departing. Billy gives chase only to discover he isn't on Earth anymore, instead he has found himself trapped in a dream world. Aided by the a prince of the land Billy sets out to find and defeat the magician, rescuing children trapped in their own nightmares along the way. 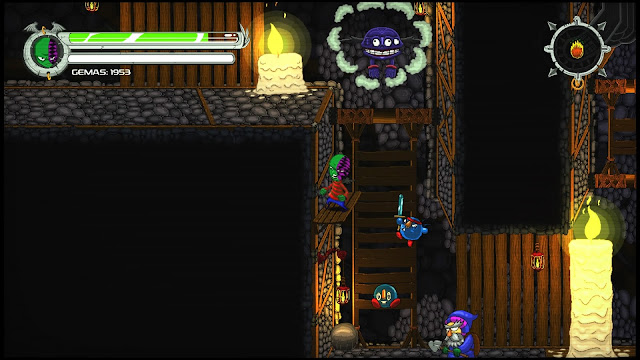 The graphics have a lot of charm to them and add a lot of character to the different locations you visit. For some reason there are fake scan lines over the screen that there is no option to switch off. I think they were included to make the game seem retro, yet this is not pixel based and so just looks weird. So the game features one big level made up of a variety of smaller areas, most areas end in a boss fight that grants you new powers and abilities. The different areas include a graveyard, dungeons, a mansion, and a dreaded ice section amongst others. Each area has its own distinct look to it so it is always recognisable, but there is none of the solid design of better metroidvanias, the areas sometimes loop back into other places, but more often than not you get to the end and then have to work your way back out. I really wish there had been a teleportation option to get around the game world as backtracking can be a bit of a pain. When you do get shortcuts open up I often found them to be full of tough enemies that made it easier just to take the long way around.

Going back to the ice level, that was maybe the very worst ice level I have ever had the misfortune of playing in a game ever. It is expected that platforms will be slippery, I do get that, but for some messed up reason even your jumps suddenly have a slide effect on them making it a right nightmare (boy) to get around some of the larger rooms. This whole section was frustrating as literal hell, made worse by the baffling decision to not have a single save room there. In general the save rooms seem to have been dumped randomly, they rarely are near anything relevant meaning if you die on a boss you have to make your way all the way back. In the middle of the map there are two save rooms around 10 seconds away from each other, other areas you will be struggling to find one anywhere. The design of the map isn't that great, there is rarely any incentive to revisit previously explored areas for instance. 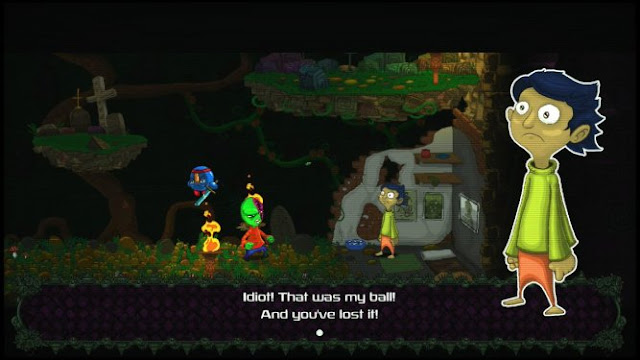 Billy controls like a nightmare (boy) himself, worse of all is his bizarre floaty jump that makes even the most basic platforming sections a real chore to navigate. Thankfully there are only around five or six really hard and unfair feeling platform sections. He attacks using his fists, so you have to get close to enemies, on the other hand though his attacks always felt quite strong, so that was a plus. Abilities unlocked throughout the course of the roughly three and a half hour game include useful stuff such as double and triple jumps, being able to bounce off of walls, and health increases, but by far the most common new ability is a new magical attack. I rarely used the magic at all as none of the special powers were really that useful so it was a shame the game keeps throwing so many new spells at you. Aside from the little helper you can summon to fight with, and a bomb that destroys special blocks later in the game the spells were all pointless.

Nightmare Boy excels with its enemy design, and the sheer variety of them. Everything from miners to snowmen, witches, and zombies, this game never tires of throwing new and crazy looking foes your way. These enemies never repeat either meaning right up until the end you are encountering new designs, pretty cool. Bosses are also a highlight with some real screen filling ones. Again no two bosses were the same and include such delights as a three headed skeleton beast, a grotesque princess, and a fire breathing dragon, all charming. 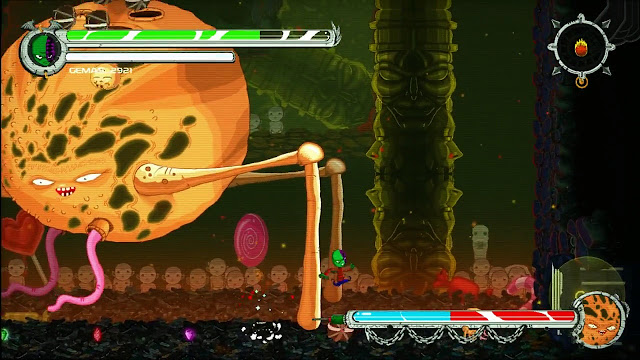 This game was made by a Spanish company and sadly it shows with the awful sometimes nonsensical dialogue that gets in the way of a cohesive story at every turn. Dialogue is slow to scroll and never exciting, Billy in particular is very bland and characterless. Rescuing the children locked in nightmares was a neat idea, and sometimes things get pretty dark. One part that stuck in my mind was entering a room to find it's decked out like a bedroom, but with video cameras everywhere, a little girl cowers in the corner while two demons resembling a naked male and female torment her. This gave some pretty disturbing connotations for what was going on and stuck out due to no other part of the game feeling this uncomfortable.

I took a chance with Nightmare Boy, it was on sale and I do love metroidvania games, but unfortunately however you look at this it isn't great. At its height it reaches average, but more often than not it becomes a real frustrating slog that sucked joy out of my body and out of my soul. While it is a great idea that dying only resets you to the last save room you used, rather than resets your progress made since then, that is not enough of an innovation to make up for a dull plot, terrible combat and platforming, and pretty unexciting level design.

Posted by Daniel Simmonds at 15:31