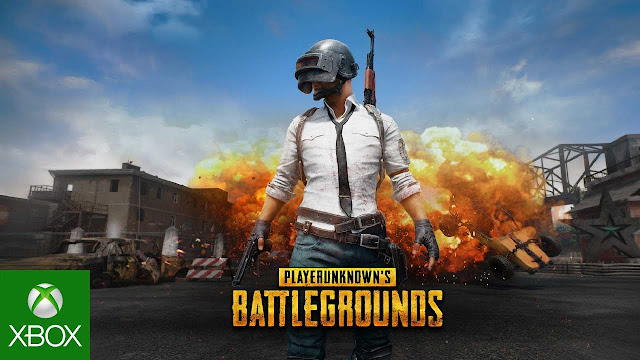 Due to the fact I once reviewed the almighty Battle Royale on this blog I just had to review PlayerUnknown's Battleground. That film was the primary influence on the game after all. With Fortnite and PUBG being as big as they are I'm sure many of you already know what this new type of game is about. Basically 100 players parachute out of a plane onto a large island, the aim of the game is to be the last person standing. At intervals the playing area shrinks to smaller and smaller circles of the map. Should you be caught outside this area then you will be in the poisonous mist and take damage. Along the way you gather weapons and armour to protect yourself.

There is no story to speak of save for survive to the end, with a multiplayer only game though that doesn't really matter. I have been putting off writing this review for a long time. Firstly the game has not officially came out as a finished product on X-Box One, secondly I have only played a few of the different game types, and thirdly and most importantly I have yet to win a match. The highest position I have gotten to is fourth place. 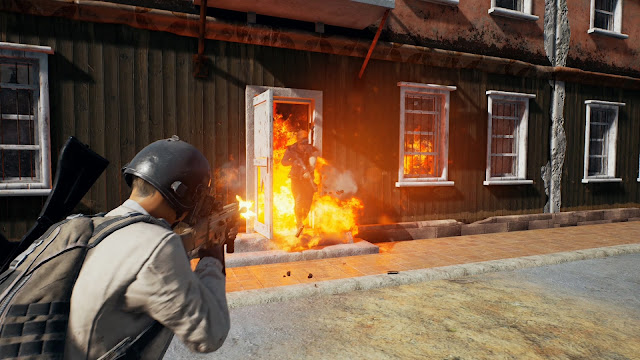 There is no other game quite like PUBG, and that includes Fortnite. I don't want this review to just be a VS argument on which game is better. I have extensively played both and so can say that while Fortnite is the better made game and is a lot more fun I actually prefer PUBG due to how much more immersive it is. For the huge amounts of stuff that Fortnite gets right I just don't enjoy the base building aspect of it, and as interesting as the map is it is just too small and hard to get lost in. There are times in PUBG where you are so far away from the safe zone that it becomes a quest in itself to reach. In Fortnite no matter where you are in the map if you leave enough time you can make it to any point on the island before the poisonous mist gets you, taking away some of the stress. Fortnite controls a hell of a lot better, but is more designed for fun than serious play, as can be seen with some of the more gimmicky weapons such as the boogie bomb that makes the target start dancing uncontrollably.

With the comparisons out the way lets talk about PUBG. As much as I adore this game it is hard to give it as high as a score as I would like, this is due to it being a work in progress. Currently on the X-Box One there is just the one map, the controls are pretty janky, and currently customisation options are pretty bare bones. I am sure in time this will all improve. There is no other experience like this game though, each time I drop it feels like a brand new experience with nothing ever playing out the same way twice. Personally I put this down to the huge map size. It is not uncommon to spend 90% of the game all alone, sneaking through houses, crawling snake like through fields, and manically running for the safe zone. It makes the moments where you do happen across someone all the more exciting and memorable. Going to recent matches, there was one where I spent twenty minutes without even a weapon, I took to driving around in a jeep that I refused to leave and ended up being in it when it exploded. Another recent match had me crawl my way into fourth place, the majority of my time was spent slowly inching my way across a field, hiding each time a vehicle drove past. My most memorable time came from when I tried to steal a vehicle from another player, he saw me but rather than kill me actually gave me a lift to a nearby house before driving off beeping the horn. 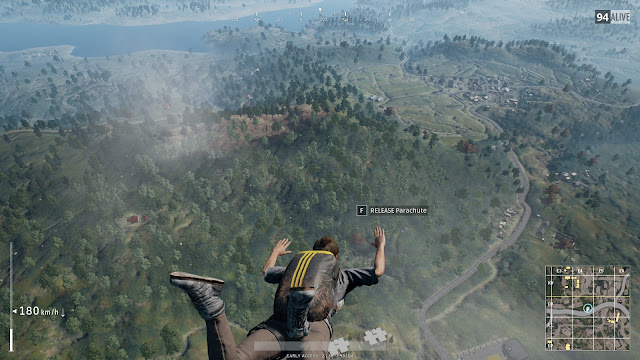 This freedom of movement and unique experiences is tempered somewhat by the controls for combat. There are so many buttons mapped to the X-Box controller that often buttons have multiple functions. In the heat of combat this can lead to silly mistakes. I never feel 100% comfortable in combat situations, often times it feels like you are in a winning position only for your shots to not seem to count. I remember one unfair time when I had full health, full shields (in the form of energy drink and painkillers), and I had an armoured helmet and armoured vest on, only to be killed in one shot by a guy entering the room from the far side. I always feel my skill level isn't good enough, practice just to learn the weird controls is really needed. On the flip side everyone playing this game has to deal with the same foibles of the control system so is not like anyone has an unfair advantage, it just comes down to skill. There is currently also no way to see how you died, this only becomes an issue due to scoped long range kills, there are few things more frustrating in PUBG than hearing a boom and instantly dying with zero idea of who shot you, or where they were, just makes you feel like that particular run was a complete waste.

Currently there are a few different game modes of which I have only played two of them. The most common mode I play is single player third person matches. There is an option for first person single player matches too, this changes things up due to not being able to see behind your character, something which isn't an issue with the third person perspective. Other modes include playing as a twosome, playing as a squad (four members), and playing as a single player in a squad match. All these modes can also be done in first person perspective. There are going to be more different feeling game modes to come. I haven't played the other modes as I am not comfortable playing this game with strangers, for one thing I don't think I am good enough yet, maybe once I finally win a match I might feel ready for squad play. 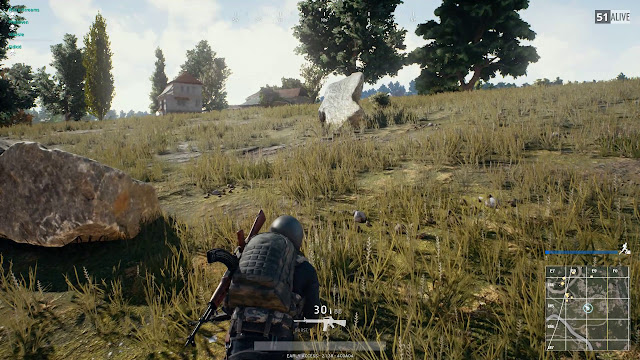 In terms of the graphics this is pretty basic looking stuff, the map is full of buildings, fields and towns but all done in quite a bland, realistic fashion, bringing to mind Eastern Europe in the look, sound design is minimal but functional. Gun shots can be heard echoing around, while as useful as vehicles are they are very loud and so you soon become a moving target for anyone in the vicinity. The most important sound effect is footsteps I feel. I don't have a headset at the moment but think that would really help with being able to identify where nearby enemies are.

PUBG is an experience like no other, it is very rough around the edges, yet it manages to be tense, heart thumpingly exciting and memorable despite an average game seeing you all alone for the majority of it. I look forward to the introduction of more features (such as better customisation and new maps), as it is though this game is ridiculously immersive and an experience like no other.