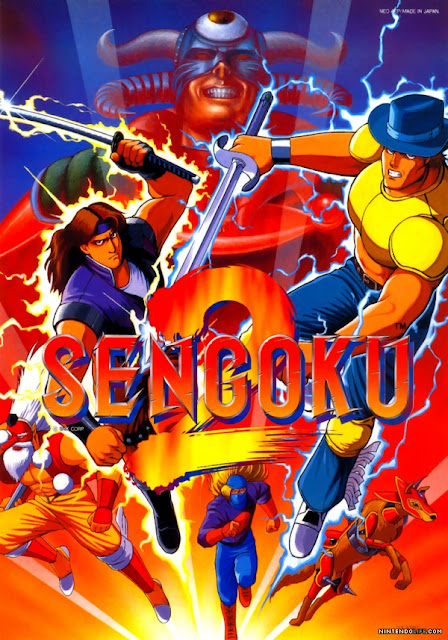 Discovering the Neo Geo port of Sengoku on the Nintendo Switch store earlier this month was a pleasant surprise, I loved the creepy vibe of ancient Japanese demons attacking a modern day city, it felt different to other scrolling beat-em-ups. I had heard many people complain about it though saying it was only with the release of Sengoku 2 that the series got good. While the graphics and sound effects are a lot better, and the game as a whole is more polished I felt a certain something was missing for me this time around, whether the surprise factor was gone, or if it just isn't as good a game I really am not sure. Much like the first game I bumped my lives right up to the maximum of 99 as I wanted to switch off my brain and relax rather than be stressed about dying.

I played through the game in both the Japanese and English versions, but didn't really see much difference. Annoyingly this time around there wasn't a story told before the game starts, I had to kind of piece it together from the cutscenes in between levels. I couldn't even tell if it was the same evil warlord from Sengoku or not. Playing as the two warriors from that one you have to fight your way to the enemy's stronghold and defeat him, that's about it. Something about him trying to alter time to make it so that he rules the world (possibly?). 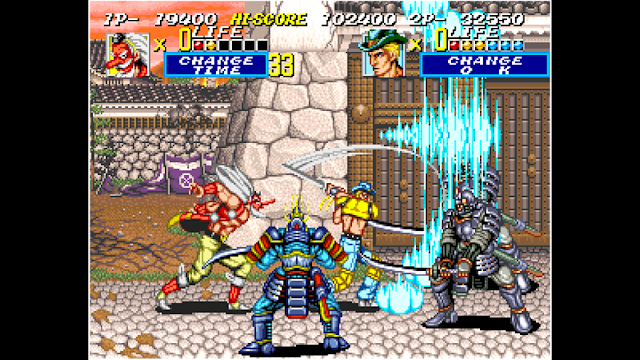 There is a bit of a Turtles in Time vibe this time around with the warlord's floating fortress able to travel through time (at least it was nice to see that Technodrome like creation return, this time with added dragons!). Each of the four levels takes place in a different time zone, starting with the modern day characters in the 1500's (no explanation for that), you then go to the 1940's during World War II, the 1990's, then finally onto the floating fortress itself. To be honest I expected more levels this time around, not less. Sengoku's final level may have just been a boss battle but it still casts this in a bad light being a visibly game shorter than the previous one. The levels all have you just scrolling from left to right but they do go to some memorable places, the third level for instance takes place in a busy shopping district, so it is full of onlookers and civilians running around, level two features a section where you are fighting along the back of a huge bomber as planes fly around in the distance. The demon levels go more abstract, such as one background featuring gigantic ghostly warriors in mid fight, and another with a huge drum that a crazed drummer works at. There were three or four sections here that took place with you on horseback as well, helped to break up the relentless fighting a bit.

Much like the first game your characters are constantly warping between the real world and the crazy Japanese demon world. With levels taking place over time there is a lot more going on with background details, but it is only really ever the demon world where you get to fight the more monstrous creatures (such as enemies resembling goldfish on legs, and huge screen filling monstrosities). I did like that there are level specific enemy types, in particular the World War II level featured gun toting, grenade throwing soldiers as your foes to fight. There is quite a bit of varied enemy design again but they seemed less Japanese in style than before, in particular the samurai warriors here reminded me more than anything of the brutes from the Golden Axe games, all muscular and wearing fantasy armour. They still have a habit of entering levels in fun ways such as being brought on in stocks on the back of a wagon, or bursting out the floor, but again it didn't feel as varied as before. Bosses are as great as ever, and do the thing of changing mid boss battle into a monster form. There is a General type character who reminded me of M.Bison, a fox monster lady, and what was probably my favourite; a samurai who commits seppuku in order to summon a water dragon. 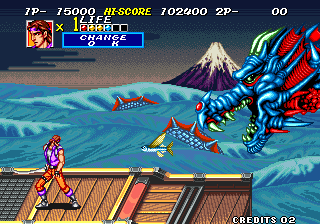 The sword was a special limited use weapon in Sengoku, here you are equipped with one as default, and boy is it fun to use! Nearly every enemy you kill dies by being sliced in half and falling apart before the evil spirit soars out from their corpse. The horseback enemies even get decapitated when they die, awesome stuff. You collect orbs to get limited magical powers again, and this time they also apply to the special characters you can summon. Once again you can summon characters to fight in your place; a fast ninja, a stick wielding monk, and an armoured wolf, they even have their own magic powers this time around. However it is only the primary character who can kill enemies in such fun ways and so I didn't really use these summons much. I did wish they were just playable characters you could do the whole game as. This also now gives you two attack buttons, for high and low moves. The enemies are very easy to kill and often attack in numbers, this weakness applies to the bosses as well. As a whole the game is a lot easier and more forgiving this time around, though there is a really weird auto aim design flaw that makes your character attack the nearest enemy to you no matter what direction you are facing, even if you're in the middle of attacking someone else.

Sengoku 2 is a fun game, in many ways it is a huge improvement, certainly with the graphics that are bigger and chunkier this time around, as are the sound effects. The music felt a bit more generic here with less of the spooky traditional Japanese sound, and I hated that there wasn't much of a story to be found. Also I found it quite strange that this is a smaller game, four medium length levels is pitiful really. Despite my complaints I did have a fun time with this, and I still look forward to finishing off the story with the third game (recently released on the Nintendo Switch store). Should I get a chance to play this in two player I will update the review with my thoughts on that.