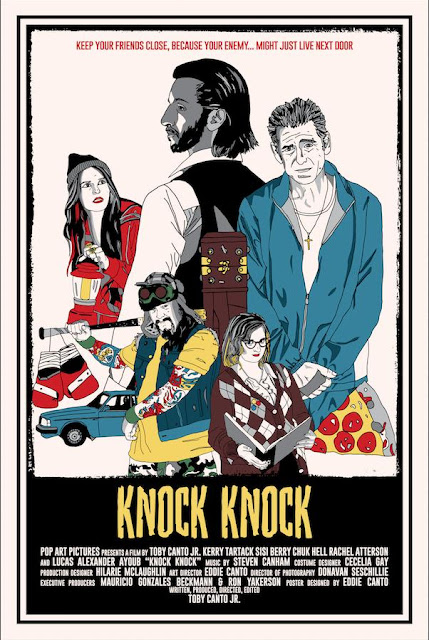 It has been a rough few weeks for me in terms of the films I have been watching for review, there has been a fair few decidedly average ones, and even some that were not good at all. Because of this I was a bit worried that Knock Knock would also fall into this blip of not great films, especially as it shares its name with the Keanu Reeves fronted trash fire that came out in 2015. Thankfully though this indie film delights due to its likeable cast, and that it doesn't try to punch above its weight, making a film that takes place mainly in a nondescript small apartment an entertaining experience.

Former boxer Sam 'Stonefist' Grant (Kerry Tartack) returns home to his apartment one evening to find his neighbour Olivia (Sisi Berry) there. Initially she says she is there to throw Sam a party as it is his 60th birthday the next day over, however he soon discovers that instead she has a more urgent reason. Olivia and a couple of other neighbours; Dragon (Chuk Hell) and Gretchen (Rachel Atterson) suspect that a mysterious new neighbour who has moved in is actually a vampire. One by one they tell Sam stories supporting their suspicion, but is the new neighbour really what they think he is?

This all starts with an advert for pizza that has the visual quality of an old VHS tape, this advert featured purposely awful and awkward actors and so was amazing, I really enjoyed this and got high hopes for the rest of the 54 minute movie. It was a nice surprise then to see the film proper had camera work of a much higher quality. Each of the four main characters get a decent amount of time to establish the sort of people they are which then feeds back into each of their little stories. Best of these was Dragon's tale about ordering garlic pizza, Hell had a great range of exaggerated facial expressions and despite playing a movie stereotype of a work shy drug abuser still managed to stand out. As an aside it was cool to see a poster I had been umming and erring about buying for a while hanging in the background of his story, that tipped the balance for me and so I paused the film to click it out of my save for later for purchase then and there. Knock Knock can be quite stylish at times and Dragon's part was one example with a nice haze effect put over his flashback.
The other biggest time this shows its style is in the fantastic end credit sequence. The film itself ends on a traditional shot, but then the aftermath plays out over the credits. This whole sequence felt out of place in relation to the look of the rest, it took place against a white backdrop and was essentially a slow paced fight sequence playing out in silence (with a great tune playing over it), but with the credits appearing around this it just gave a real feeling of coolness, helped again by the fantastic facial expressions of the cast.

The mysterious next door neighbour is played by Lucas Alexander Ayoub and he was another great casting choice, he really looked the part of the role he had to play. Special effects are minimal but they work. There is CGI for many of the effects but it is not over the top, it is applied more subtly. CGI is obvious when it is being used but it compliments rather than suffocates. There are also practical effects used and some nice costume design, as a prop that turns up in the after credits section that I own one of myself, was weird to see it used as an object in a film! While I never found this to be hilarious I did enjoy the on screen chemistry the band of misfits had, they were united as a group with no sort of real conflict between them. The humour didn't rely on gross out jokes and wasn't goofy, but had a nice line between just being pleasantly reliable.

One of Knock Knock's greatest strengths is that it plays to its indie budget. It takes place mainly in the one location, has a small cast, a simple story but it just works. By keeping the scope of the story tiny it was able to tell a entertaining and well paced tale. Saying that the one action sequence that takes place during the film itself I found to be quite confusing to follow, to be honest I was relieved when it was over as I couldn't really tell what was going on. The nature of the sequence meant it was supposed to be chaotic, perhaps a homage to the style used in Evil Dead, but the close up camera angles and quick editing I didn't find effective at making this part cohesive.

I really enjoyed my time with Knock Knock, it is nostalgic in its craft, and while it may show its indie budget on occasion it was a fun watch and had some nice writing and directing by Toby Canto Jr. (he also co-directed and co-wrote the 2012 zombie film Dorm of the Dead, now I have owned that for years and never actually gotten around to watching it, I should really bump that up my pile of films to watch). Knock Knock is currently available to watch online from a variety of places such as Vimeo,  and Apple TV.