Slop is a short slasher that clocks in at 40 minutes long and which was co-directed by Kelly Kalusha (who also has a role in the film), and Josh Ludwick (who wrote this as well). While this is very indie in some respects I was impressed with the overall quality to be found here, and I liked how the essence of a slasher was condensed down without really seeming to miss much out.

A little girl is abducted by a pig mask wearing man (Jacob Phipps) near an old barn, her friends report this to the police who are shocked to discover the remains of several missing people inside the place. A local news crew want to do a story from the crime scene but can't get access, so they decide to head back in the evening when the police would have left. Unfortunately for them that's also the same idea the killer has... 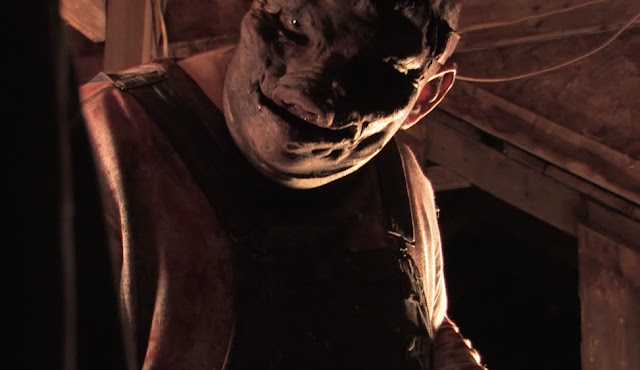 I really enjoyed this, Slop had a tight three act story that covered all the bases it needed to. It was a neat idea to have the killer discovered early on as it gave a weird feeling of this being a sequel within its own film. Opening with Slop (what the pig masked man is named as in the credits) going about his business we get some nicely edited flashbacks of two of the victims and how they came to be killed. This character is by far the best part of this short and was an imposing presence whenever he was on camera. The look may remind me of both Piggsy from the Manhunt videogame and of Larry from author Adam Millard's comedy send-up of the slasher genre but he was a cool creation. It helps he is built like a brick wall, he steals the scenes he is in. A particular favourite part had him in the extreme foreground looking at the camera as a character tries to sneak past behind him.

A slasher lives or dies by its kills and here we are treated to some really fun ones. It is always good when these films get inventive with the deaths and here there are a few that are based around camera equipment, such as two victims who get impaled by the legs of a camera tripod! Also some lovely hammer attacks with plenty of blood. The way it cuts to a different scene of a character hearing this 'thump' 'thump' 'thump' then cutting back to the killer hammering a victims head in was great. With low budget horror films it can be hard to make kills flow well, thanks to some really fast editing that never felt like a problem here as much as it has been in other indie slashers. My one complaint with this aspect is that there is one death scene where someone screams, but this sound occurs after what looked very much like a killing blow took place and so seemed a bit out of place. 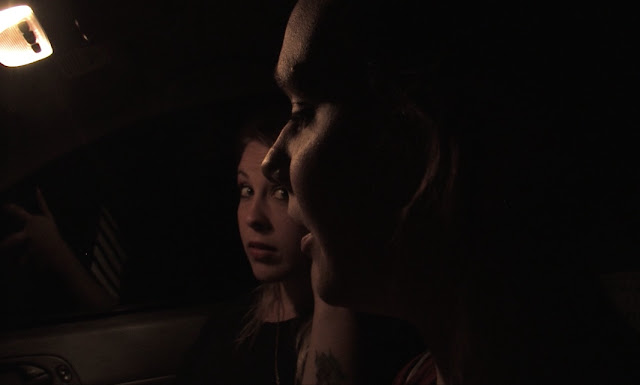 While Phipps is great as the killer the rest of the acting was pretty average across the board, it doesn't matter as much for this genre of film but it was quite consistent with lines never feeling too natural, or spoken with the right amount of confidence to make them believable. Still despite this it was all pretty fun, the scene with the dodgy coroner and his long suffering partner was quite amusing, and the slightly goofy characters in general fitted this film very well. There was a lot of background interference throughout Slop and while it helped in the scenes that took place outside I found a couple of lines spoken impossible to make out due to this interference, neither times this happened it felt like I was missing anything essential though, and going back to this being an indie film it gets a pass. Interference aside this is a quality piece of film making, the directing and editing was all very slick with some nice framing of shots and effective use of space.

Despite the acting not being of the highest quality, and the sound issues I really enjoyed Slop, it had some great special effects, impressive directing, a memorable killer, a headstrong final girl, fun kills, and a well paced story that meant there wasn't a dull part to be found.