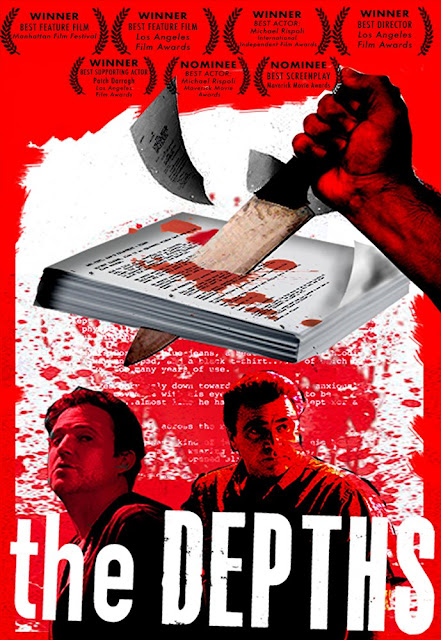 Award winning crime drama The Depths isn't really the type of film I would normally review on this blog, that is my fault though for not really looking into what type of genre this was for before accepting. That isn't to take away from what a solid drama this was, I was certainly kept glued to the screen long after the realisation sunk in that there would be nothing really horror like about this. The story was almost Shakespearean in how it chronicled the disastrous fall out between two flawed friends, and how the descent into the darkest parts of the human soul can happen to anyone given the right push.

Ray (Michael Rispoli - Kick-Ass) and Mickey (Patch Darragh - The First Purge) are best friends who for the last two years have been writing a screenplay together with the dream of selling it in order make their riches. After this screenplay gets rejected the two fall out and soon Mickey finds himself out of a job and addicted to cocaine. Both decide to write a new screenplay independently of each other, though Mickey feels to really get to know the mind of a killer (which their story was about) he has to expose himself to the rawest parts of humanity. 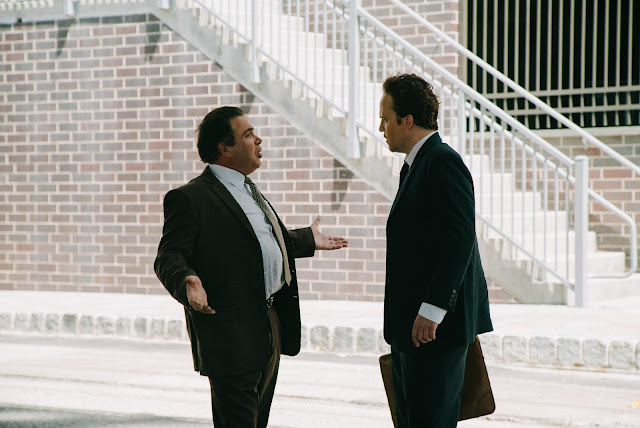 Early on in The Depths the two friends pitch their idea to a businessman, it became obvious there and then that the story they were trying to sell would actually prophetically come to pass as the plot of the movie itself, so in that respect there were not too many surprises in the overall gist of the story. Neither of the two characters are that angelic to begin with, Mickey is lazy and unwilling to put in the work to improve his life, while Ray is shown to have quite a bad temper. The tipping point of their rejection leads to two very different paths travelled with Ray keeping at his job while working to better himself by researching at the local library. Mickey meanwhile loses his job, gets evicted from his apartment, and sees coke as the answer to his creativity. Wallowing in the lows of society is his solution, an early visit to a crime scene inspires him onto this path. Most of the movie focuses on Mickey with Ray relegated to a secondary role.

The scope of this centres on a small number of characters, both Rispoli and Darragh are well suited for their roles with their wise-guy way of speaking, while Charlotte Kirk as the prostitute Chloe  becomes an essential sound board for the conflict. This character doesn't really have much of her own identity about her, more she becomes an extension of the main two friends minds, she is like the negative inner thoughts both men possess. There are a number of secondary characters but none who add much more than to show the viewer how far off the path Mickey has gotten (such as the hardware store owner and the landlady), or as a means to move the plot along (the businessman and the drug dealer). This gives quite an insulated character study of Mickey in particular. He is almost like Dostoevsky's Rodion from Crime and Punishment in that he has been inspired by outside forces to make drastic life choices in anticipation of a great reward by following through with hasty actions. The Shakespearean tragedy aspect comes from this character oblivious to how damaging his decisions are to himself, as all around see his transition he himself thinks what he is doing is justified. 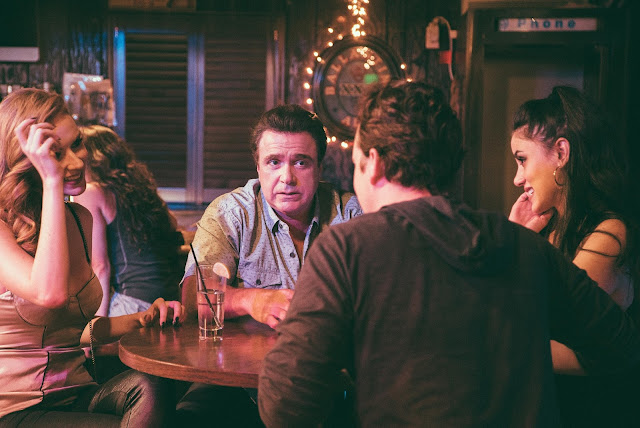 While the plot itself was literally signposted early on I still enjoyed the ride this took in showing how it gets to be there. The finale was well played out and the final minute of the film with its reveal was my favourite part of this. I understand the desire to explore the dark road Mickey is on but feel it would have been nice to see more of Ray in the second half as I felt he was a good comparison that got under utilised. While this is mostly horror free in the traditional sense I did like the couple of times the violence of humanity showed up, the early crime scene visit in particular had some really nice editing to it and was the stand out scene in terms of directing.

Sure it may be a little different to the types of films I am used to watching for review but this was a well planned out drama that had some good casting choices and a story that felt like it would work just as well on stage as on screen. The Depths is due to release on April 24th on Amazon, i-Tunes, Google Play, DVD and other places so be sure to watch out for it if it appeals.

Posted by Daniel Simmonds at 14:51