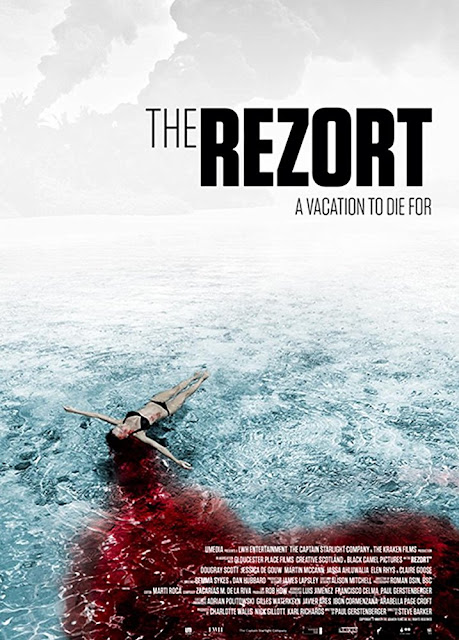 The Rezort has been on my 'to watch' list for a while on Netflix, however the awful title put me off seeing it as it sounded dumb. Having now watched it I can safely say that it is really not as bad as I feared it would be, indeed it was actually quite entertaining with some fun moments, that is not to credit it with having many ideas of its own though as it sees fit to borrow bits from a whole host of other films.

It was ten years ago that humanity won back the Earth from zombies after an undead apocalypse and the population are still suffering the after effects of that brutal time. The world is now undead free, that is except for a small island known as 'The ReZort' where the rich can pay to go on a zombie safari of sorts. Melanie (Jessica De Gouw - Dracula, These Final Hours) is still plagued with PTSD from the war and so has gone there with her boyfriend Lewis (Martin McCann - The Frankenstein Chronicles)  as a last ditch attempt to recover. Once there she heads out on a safari with a bunch of strangers that include among them ex-soldier Archer (Dougray Scott - Fear the Walking Dead), undead rights activist Sadie and two immature chav best friends. Unfortunately for them someone has uploaded a computer virus into the resorts computers which has resulted in the security going offline and releasing the undead, so now the group must work together to try and escape the island before the dreaded 'Brimstone Protocol' comes into effect and cleanses the place... 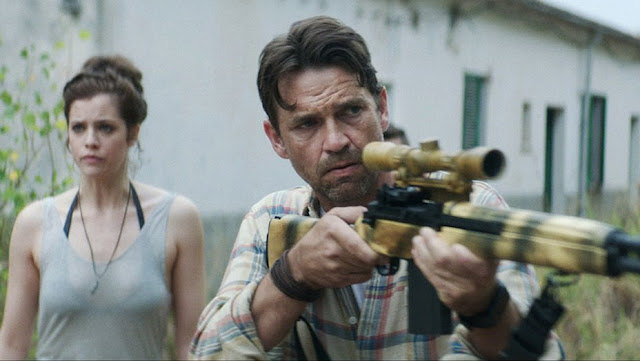 So I didn't expect much and my initial impressions were not too favourable. It all starts off with a series of badly framed TV news reports with reporters talking about how the island is due to be bombed after an outbreak which does admittedly set things up nicely. We are then introduced to our main characters and get a peaceful half hour of them going about the resort. The plot of someone stealing data and then causing chaos to hide this fact was plucked right out of Jurassic Park, and this does at times feel like that but with zombies replacing the dinosaurs. Continuing this trend the whole safari aspect reminded me more of The Lost World: Jurassic Park. Both films have a charismatic owner, both have a carefully orchestrated adventure trip collapsing, they even have the exact same style of jeep that visitors to the park are driven around in. The whole time limit aspect to the story also brought to mind Resident Evil, this limit was applied about as well as it was there (i.e: not very well).

The characters are quite flat and one dimensional, yet I liked how I did come to care for even the most annoying ones. The two young men for instance are abysmal with their English chav speak, yet they never do anything too offensive other than act like complete morons. What was good to see was when one of them meets an unfortunate end the other gets upset about it and actually stays that way for the duration. Too often people are killed in films and their apparent best friends are only upset for the scene it occurs in. Here though the character is never the same again becoming withdrawn and depressed, it is a shame that something like this was actually fresh in feeling. De Gouw was fine enough as the main protagonist, she didn't have too much to her but at least she wasn't irritating like Day of the Dead: Bloodline's lead was. The other characters are all fine, none really feel original at all but at least they didn't offend. There were some heel turns that just happened without any foreshadowing, I also liked that, but I didn't like so much that the owner of the park was framed to be a bad person long before there was even any hint of that being the case. 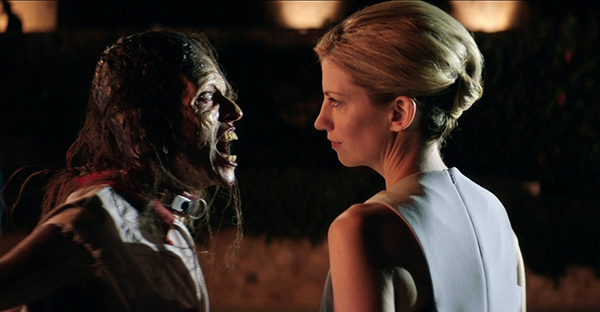 Onto the zombies and they are again quite inoffensive. There is no weird style to them, they are traditional slow moving zombies (to begin with), the make-up for them is perfectly fine, my only real issue being that they tend to just appear in groups, there are not many scenes of just a couple of ghouls wandering around. For some reason they decided to make one of the zombies a recurring one that seemed to have more intelligence than the others. I don't know if this was to try and make the audience sympathise more with the undead but if it was an attempt it failed. Later on they become more modern 'runners' which just about makes sense within the context of the film. You get plenty of people getting ripped apart by masses of the critters, though being fifteen rated you don't actually see people get much more than being bitten, but is still plenty of blood on occasions. It all leads up to a finale that was a carbon copy of the chase sequence from the start of 28 Weeks Later, but with added zombies and explosions. It may have been derivative but boy was it an exciting way to end the film.

The Rezort is not without its problems, homages to other films aside there is an annoying habit of random zombies popping up on screen when least expected to take out a character, I did get a bit annoyed that for all the doors characters go through it is only around one in ten they actually bother closing behind them. Plot wise this is basic stuff, there was a nice little twist that I appreciated, and the idea of a world that has experienced a planet wide zombie apocalypse meant it skipped the need for people to not know how to deal with rotters. 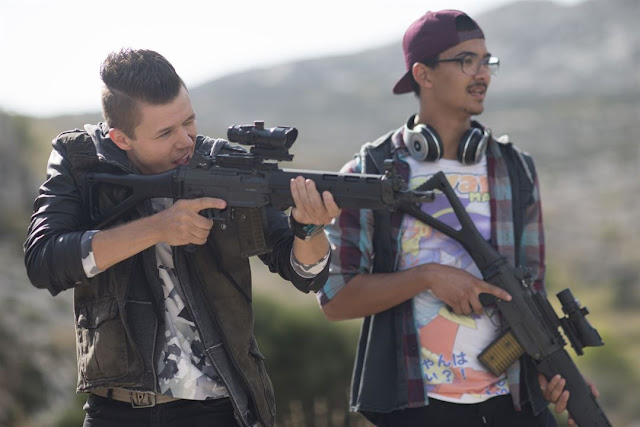 I have seen literally hundreds and hundreds of zombie films in my time, while The Rezort isn't up there with the best it is still a hell of a lot better than many I have seen. This is a decent enough slice of brain dead entertainment that doesn't have many original ideas of its own, but does provide what it set out to; entertain.