Without Escape was originally released on the X-Box 360's Indie section back in 2012, and so this new version is actually a remake of that one. This marks the first proper 'room escape' game I have really played, unless you count The Room trilogy on iOS. This is inspired by puzzle games of the 90's such as Myst, due to it being a homage it is quite simple, simple enough that even my PC was able to run the game perfectly.

This game sees you as a man staying at his parents house while they are away on holiday. Late one night he gets woken up by a strange noise in the house and he decides to investigate, fearing burglars. What he finds is much more bizarre, the house is slightly different to how he remembers it, and he discovers he is unable to leave. Soon he finds himself in an alternate Hell type dimension that occupies the same space as the home and by solving a series of puzzles he must find a way to escape the predicament he finds himself in. 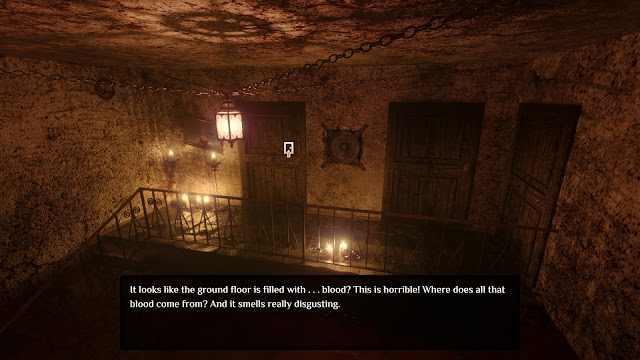 So this is made up of a series of rooms that feature static backdrops and  plenty of text descriptions. You travel from room to room by clicking on doors and stairways and it all takes place in a fixed perspective. You use the mouse to control this and do so mostly my clicking on items of interest. As you progress you collect different items, such as a lighter to help you see in the dark, and keys to open the various locked rooms and cupboards dotted around the property. This is not a large game, the house itself is just a house, not a mansion, the only thing keeping the game long is its puzzles.

Puzzles make or break a game such as this and I was a bit nervous going in due to fearing I would get stumped. The point and click adventure games of the 90's were my favourite games of any type at one point, I would spend hours scouring over the screens trying to figure out what to do next. That aspect of Without Escape has been streamlined, you have an inventory but it is there only as a visual aid, if you click on the correct object and you have the correct item in your inventory then you automatically use it. The puzzles themselves were what I thought I might struggle with, but actually with a calculator to hand I was able to solve all of those pretty quickly, aside from one devious one involving a wall full of clocks that I was starting to pull my scant hair out at until it clicked. 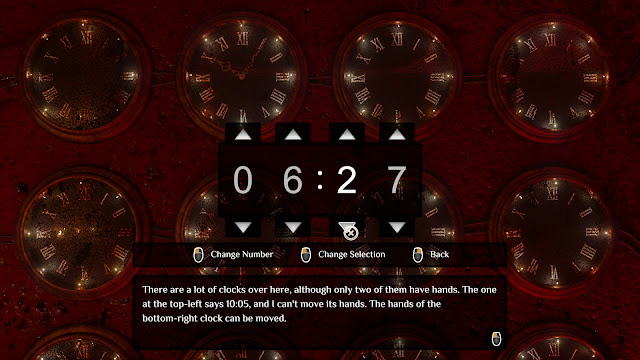 My completion time for the first playthrough was just over an hour long, the game costs around $6.99 so is up to you if you think it is worth that amount. My second playthrough took me just six minutes, however that was an ending that only required me to do around two thirds of the game. There are multiple endings, I saw three of them but I think there are at least two more to discover. Despite there being a warning about depictions of grotesque horror there were only around three different screens that had anything of a bloody nature, such as a torture room complete with gory corpse, a body in a bathtub, and other such things. The idea of being alone in a house in the middle of the night should have been creepy, however with the static screens and lack of any real scares at all I found the whole game to be entertaining, but by no means even slightly creepy or scary which was a disappointment.

The short while it took me to get through Without Escape I did have a good time, it grabbed my attention and it was a constant joy that I discovered a game my PC could actually run. The plot goes to some crazy places, but I didn't find it that engaging, while the puzzles were mostly super easy with only a handful requiring any sort of brain power. Without Escape was released on itch.io, Windows Store, and Steam on April 24th, and a soundtrack is also available for it.