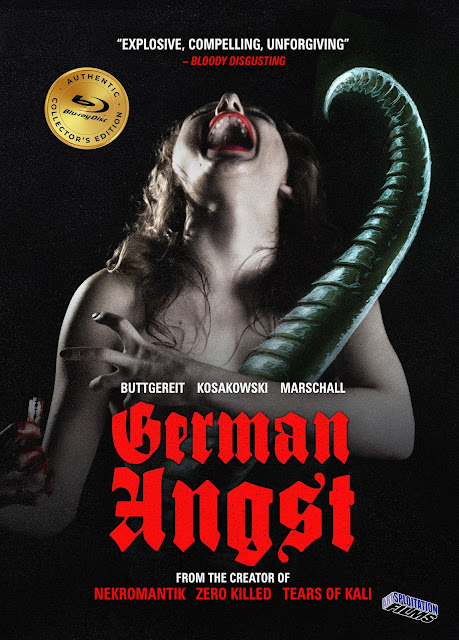 Another day and another horror anthology, yesterday was A Taste of Phobia while the one I watched for review today was German Angst which I first mentioned back in April (here). Now I love my anthologies and I like them even better when they are as well made as this one. The theme this time is pretty obvious on the surface in that each of the three films contained within German Angst are German shorts, they are all set in Berlin, and each directed by a different German director. Unlike A Taste of Phobia though these films all share a lot of themes in common with each other, such as the harshness of existence, and of course plenty of body horror.

The first film is Final Girl that was written and directed by Jorg Buttgereit (Nekromantik) which comes in at around twenty five minutes. A self harming teenage girl obsessed with guinea pigs lives alone, that is aside from the man she has tied up in one of the bedrooms. The main character made this one with a great performance by Lola Gave. She plays the part of a girl who has well and truly cracked, most the voice over for this being her giving a multitude of facts about guinea pigs which in a twisted way gives a view of her world and the inherent cruelty it has. You could see the insanity dancing in her eyes which made her role seem more believable. This was the least good of the three films, and I don't mean it was bad, I enjoyed it, just in comparison there is less going on. It features some bloody scenes of torture and self harm, I liked how flashbacks were inserted into certain scenes, and how this seems to be the end of the girls journey that mostly occured before Final Girl even starts. 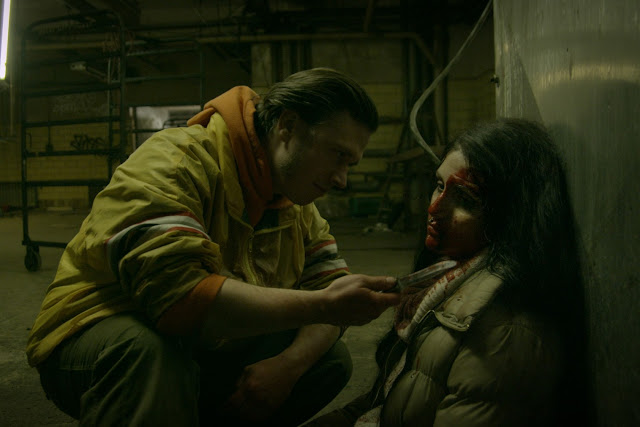 The middle short is Make A Wish (around thirty five minutes) which was directed by Michal Kosakowski with a story written by Goran Mimica. This was my favourite film, very nasty indeed, but in a way that has you as the viewer not minding so much. A deaf and mute couple find themselves at the mercy of a violent gang of thugs. however an amulet they own may be the key to turning the tables on their assailants. This was a brutal piece of filmmaking that had some gruesome scenes of torture including an ear being ripped off, stabbing, burning and more. The aspect of potential body swapping added a fun twist to this. This was really well made and while some of the gang members were a little bit over the top I found the ring leader to give a captivating performance both visually and with the way he delivered his lines. This brings in themes of racism, and of the effects of victimisation, and the justification aggressors use. However the way in which it explores this was interesting, a corruption of ideals making the victim acting in a way that makes him no better than those who are wishing him harm.
This had some great flashback sequences that took place in a Polish village under assault by a group of Nazis during World War II. The look for this was helped by a grainy type of stock footage effect to this flashback, and plenty of grindhouse horror and cool looking effects such as someone getting their head crushed under a boot. I was a little bit confused as to what actually happened due to scenes playing out in alternate ways suggesting that just maybe things aren't what they appear to be. While there is an obvious link with Germany's dark past it also works in context with things which are happening in the world today, with an English gang member helping to remove this just being a German problem.

The final short is about fifty minutes long and is Alraune that was written and directed by Andreas Marschall (Masks). In this one a man who was recently dumped by his girlfriend discovers a secret sex club that offers unforgettable pleasures from a horrific source. This was very gory, in fact it had the stand out extreme scene involving a character trying to kill themselves with broken glass. I nearly had to look away during that very bloody scene, best bit when the character swallows and a shard of glass breaks out of their throat! The majority of this one was in English, however some of the characters had very thick accents and so could be a bit hard to understand. I didn't really understand the plot too well, but by the end I had got the gist of it. This uses the method of the main character in the present recounting just what led him to get up to the moment he finds himself in. The special effects were great here, and includes a nightmare scene of a monster ripping itself out of a victim's body. 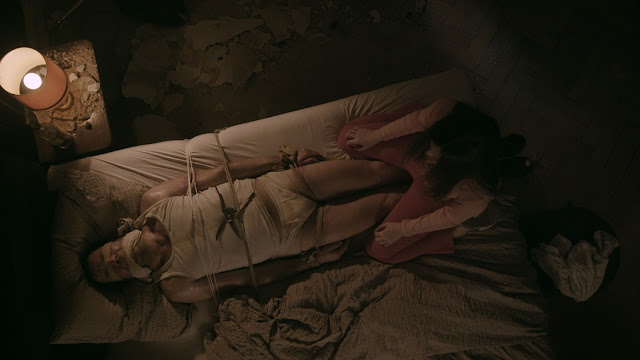 All three of these films had mournful piano based soundtracks that added so much atmosphere and mood to the pieces. This soundtrack helped unify the three, but the ultra violence, and the quality of all these also helped with that. I don't really like body horror too much but I still found myself liking the vision that had been gone for here. It may be nasty and give a jaded view of humanity but these where all well directed and all had some good casting choices. This won't be for everyone but regardless the quality makes this rise above the grindhouse roots. German Angst is coming to Blu-ray on June 26th thanks to the people at Artsploitaton Films.