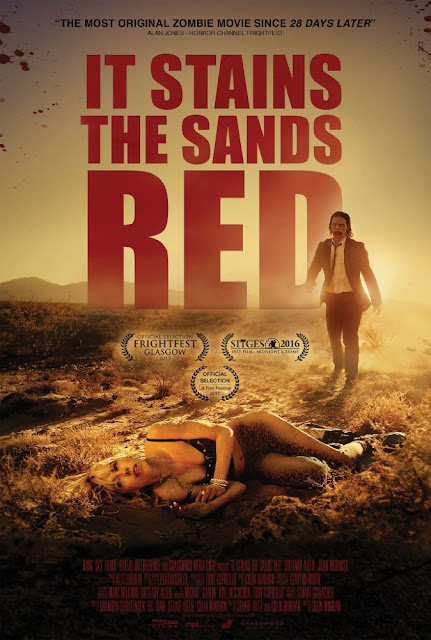 I liked the idea behind It Stains the Sands Red but I admit I did go into this expecting it to fail, I was more intrigued how this would play out. Basically this is a movie about one solitary zombie, and it's unending pursuit of a woman across a desert. The fact that the undead never get tired, never sleep, can keep going forever means that even one of the slow shambling type can over time erode a persons will with their constant chasing.

Molly (Brittany Allen -  Jigsaw) is the girlfriend of a small time criminal who is en-route to a remote airfield near Las Vegas where he is to meet his boss and get on a plane out of America. A zombie virus has swept the continent and with no sign of aid it is everyone for themselves. The car getting a tyre stuck in a hole is the start of the worst few days of Molly's life. Her boyfriend is attacked and killed by a lone ghoul, she flees into the desert but is horrified to find this creature following her relentlessly. Now she is on a forced march to the airfield some 30 miles away, all the time the zombie hot on her heels... 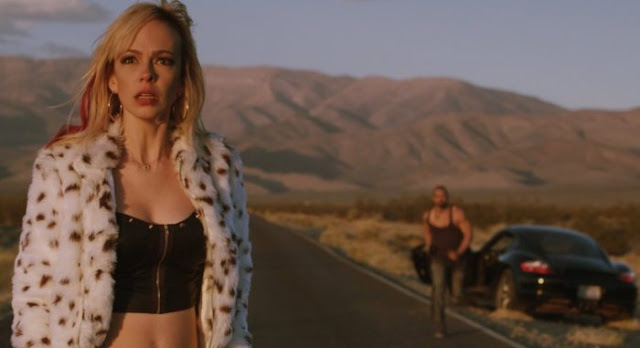 Aside from nice quality camera footage and some nice little music video style sequences the best thing about It Stains the Sands Red is sadly the title itself. I figured I would be bored, that woman vs zombie would soon turn dull. There is always just about enough going on to keep things from getting boring, this would be a good thing were it not for the fact I just plain did not like Molly. I didn't understand her actions, I didn't pity her mistakes, and by the end of the second third I straight up found myself opposed to her silly ideals despite the efforts of the camera and the sound to try and put me on side with her.

It starts off well with a nice fast swoop over Las Vegas showing the utter devastation that has hit that city. After this we spend the majority of the 90 minute film out in the harsh desert where the blazing sun, lack of food and drink, and the persistent threat are a force for Molly to contend with. This was all good enough but then the decision is made for Molly to befriend her zombie pursuer and an attempt is made to get you to see her point of view and feel sorry for the walker. It's a brain dead zombie though, this is no Bub and so I never changed my opinion that she should just try and kill it, no matter how much director and co-writer Colin Minihan (Grave Encounters, Extraterrestial) tries to make this friendship of sorts seem genuine. I found myself actually getting annoyed with Molly. With her history of drug use, the company she was keeping at the films start, and flashbacks hinting at her child being taken away from her it is obvious she has had a dark past. The plot of this movie gives her a redemptive path of sorts with her coming to realisations that much like with the monster chasing her she needs to look back and face her demons, only then will she have the strength to go forward with new purpose and new hope.

So not much really happens here, her journey is clear from the outset and so it gives a destination for the adventure to get to. Along the way there are a few different scenarios she gets into to keep things going. A scorpion crawling over her face in a abandoned house she finds, two suspiciously friendly men she bumps into, a run in with some soldiers, these all add elements that just seemed there as something different to see other than her tireless chase. The budget comes back for the final third that sees the heroine with a new objective and it was fun to finally see the arrival of more undead, but by this point I had had a falling out with this that was too far gone to be repaired.

Allen is fine as Molly, Juan Riedinger (Grave Encounters) is fine as the zombie chasing her, side characters are all fine, as is the make-up effects and music. For me I just didn't think this was an amazing film, it was interesting to see how a film with one undead creature worked, it is just I did not get on with the protagonist and her stupid decisions which ultimately left me cold towards her and the film as a whole.