The Rotting Zombie's Round-up of Horror News for June 2018 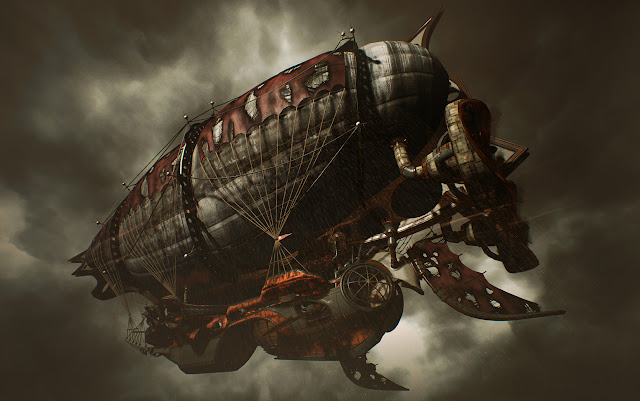 Once again it is that time of the month when I give out some nuggets of news for your ocular approval. I like the word 'scattershot' and so I shall be applying that erm with the approach to the news for June. First off to the land of video games where I noticed there is a new map for the ever giving wave based zombie survival game Killing Floor 2. This new map is set on a steampunk themed flying airship and is fittingly called Airship. I love that Killing Floor 2 regularly adds free maps but often they kind of look like they should be free, not so with Airship which has a fantastic design, it is one of the better looking maps for game. This map is also objective based with a mini story going on over the rounds you play, rather than just kill everything you must fix parts of the ship as well as defend certain areas at set times. On PC there is also a second free map Endless Lockdown, this is yet to appear on the PS4 version but hopefully at some point this summer.

The press release was a bit low on solid details but Dirge is a new horror film that was directed by Richard Oakes and Adam Leader. It takes place in 1970's England and has Charlie (Neal Ward) and Olivia (Nadia Lamin) heading on a journey into isolated woodland where they must face their darkest fears. This is a psychological horror that is about 'questioning ethical principles of our society, how we deal with mental illness and the duality of love and ego'. I love the concept trailer for this, it is quite fantastic so I hope the film itself lives up to the ideas shown there.

I last mentioned Five Wild Animals back in February when a teaser trailer for this was released. It is a horror about a group of friends who travel to a remote mountain town for a Halloween party. It is due to premiere this Autumn but in the meantime so new stills have been released, a few of which I shall include below.

The 25th June marks the four year anniversary of Videogram (Magnus Sellergren's project that is made up of music based on eighties horror synth). To celebrate the anniversary SelectaVision is releasing the Choice Cuts 2014-2018 compilation on CD and on Digital. The fourteen track album takes songs from all official Videogram releases and includes some additional bonus tracks. Pre-orders for the digital release are available here.

There is a new Go Fund Me campaign to raise funds for Albert Pyun's new film Bad Ass Angels and Demons. Set at the end of the world 'the Bad Ass Angels fights the demons to establish the dawn of a new generation for Planet Earth'. For any Jean-Claude Van Damme fans it will be interesting to note that Pyun directed 1989's Cyborg. The campaign was started to raise funds for equipment and special effects needed for the film, the amount needed has already been raised but you can still contribute here if you so wish.

Dark comedy Vidar the Vampire (first mentioned back in August last year) came out on VOD on 12th June. It is about a 33 year old bored Christian farmer who wakes up one evening to discover he is a vampire. There was a new trailer at the start of the year so I will include that below.

Blacklava Entertainment has released a new trailer for the upcoming region free DVD release of Triptychon of Fear. This is a trio of 'gloomy and horrifying stories' from Grindhouse Entertainment. The first story is about a drug addict duo who crash while fleeing the scene of a crime and find untold horror. The second story is about a man who finds himself trapped in an old attic by a mysterious force. The final story is about a woman who has ran home after being chased by a ominous stranger, once home she starts to suspect she may have imagined the figure chasing her. This DVD is due out on 13th July.

An Idle Mind is the Devil's Playground that I gave a respectable 8/10 back in March has now been released on DVD on Amazon, BestBuy, Barnes & Noble and more online retailers. The film felt like a lost Twilight Zone episode (on a side note I have recently brought the complete The Twilight Zone on Blu-ray, most exciting for me!) and is about a long term shut-in who has a huge fear of people, but one day finds his house full of strangers he cannot get rid of.

Finally FraXtur is an upcoming post-apocalyptic TV series that stars such people as Denis Richards (Starship Troopers) and Dallas Page (The Devil's Rejects). It is about a bunch of millennials who find themselves in a post apocalyptic wasteland where not only lack of food and water is an issue, but also violent tribes and terrifying monsters. Bad title aside this does sound like it could be interesting.
Posted by Daniel Simmonds at 10:20

I have heard the saying "an idle mind is the devil's playground," but I have not heard of the movie. Thanks for the heads up.

I've always had a fondness for The Twilight Zone so I really liked the old fashioned style of that one.