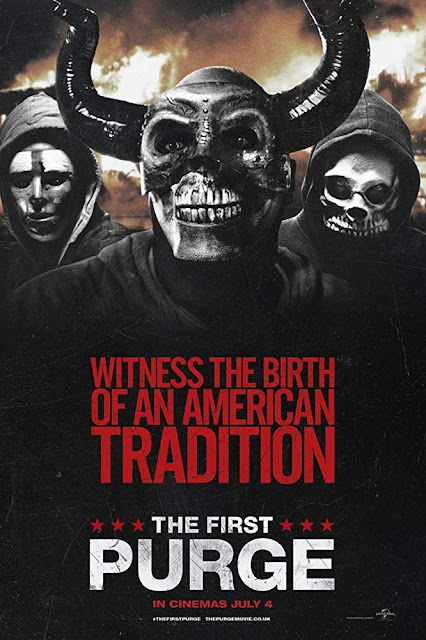 Back in 2016 during my review of the third film in The Purge series; The Purge: Election Year I said "..personally if I had a choice I would like to see a prequel, maybe the very first year of the Purge". Well it seems someone was listening as the newest entry in the series is indeed a sequel, the title The First Purge kind of gives it away that this takes place during the very first year. I have always enjoyed this series, even The Purge while squandering the potential it had was interesting, though it boiled down to a cookie cutter home invasion flick. The Purge: Anarchy was a real setting of the style the later films would come, and this follows the format pretty well.

With a prologue detailing the New Founding Fathers (N.F.F) rise to power we get introduced to 'the experiment' which is a night of legal crime intended to let the American populace act out their anger, but restricted just to Staten Island. As is the norm the first third is the lead up to the night with several different groups of characters being introduced. Dmitri (Y'lan Noel) is a leader of a powerful gang who is determined to do his best to keep his men and his empire safe. Elsewhere Nya (Lex Scott Davis) has been protesting about the experiment and is concerned for her younger brother Isaiah (Joivan Wade), who himself sees the night as a means to get revenge on a local psycho who goes by the name of Skeletor (Rotimi Paul). When the night begins it soon becomes apparent though that the N.F.F are determined the event will be a success even if they have to intervene. 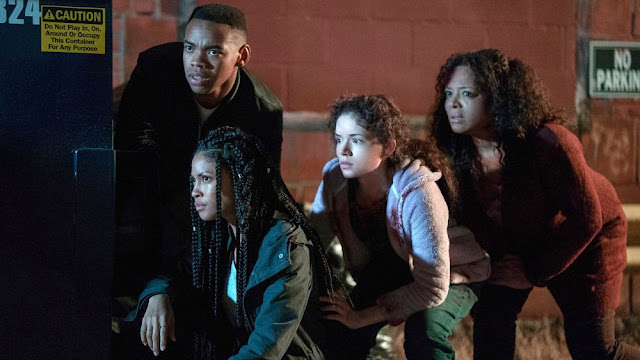 The potential of exploring how this event would come to be was mostly explored well. A low income, crime ridden area was chosen as a test bed with the poor citizens offered life changing amounts of money to stay in the area, with added benefits given to those who sign up to participate. The people are microchipped and fitted with contact lenses for their actions to be recorded. That in itself was a stylistic choice as the contact lenses are glow in the dark and no one person seems to have the same colour ones leading to some great visuals. By focusing the event onto a single location it frees up more conversation from the populace of America, and also creates a 'war' room where a team of researchers, including the originator of the idea track the moments of the night. I liked this element a lot, it gave more of a face to the usually faceless government, it reminded me of The Hunger Games.

The Purge films have always had great costume design and here is no exception with no end of gangs appearing that gave off a nostalgic feeling of The Warriors. You have machine gun toting KKK members, white supremacists, even a crack squad of soldiers all wearing grotesque black-face masks and led by a PVC Nazi uniform wearing commander. As that would indicate this is less a protest about the amount of violence in America and more about the inherent racism that still pervades the country, as well as the broken political system. The series does have a tendency to go a bit ham fisted when trying to show these ideals, sometimes it is a bit too obvious, like when it shows a gang of white policemen beating up a black man on a baseball pitch. There are also a few references to Trump which stuck out like sore thumbs (I winced when someone comments on a particular body part of theirs being grabbed by a sewer dwelling pervert). The script at times was a bit basic, mostly it is fine but a few parts where I rolled my eyes. The various psychos and crazies show up all over the place, my particular favourites being the two old ladies with their shopping trolley full of explosive teddies and dolls. The main antagonist is a nutter called Skeletor. He was integral to the plot and was played wonderfully by Rotimi, a very unhinged and intense performance. It was just a shame he vanishes for a good chunk of the middle part of the movie, only showing up again for the fantastic finale. He served as the manifestation of the hate that the N.F.F try to convince the American people they have. On that topic of the finale it was pretty stunning, taking place in an apartment block being assaulted, every thing about this whole section was just a demonstration of glorious violence. The ending can't really match this though, being a prequel there can be no real resolution so it just sort of fades away to credits with no exploration of the aftermath of this first experiment, a little bit disappointing, especially with the annoying Dolores getting much of the final dialogue.

The main, mostly black cast were all good, despite playing a bad character Dmitri was really the most likeable person here, Nya was also someone it was easy to root for. Not all people fared as well though, such as a super irritating comedy character named Dolores. This woman (a friend of Nya) is full of wise cracking one liners that dramatically reduce the tension of the finale to a negative degree. I really could have done without her awful lines (though people in the audience were laughing so I guess she appealed to some). There is always an excuse created as to why people find themselves outside during the Purge, being the first year gives there far more reasons, especially early on when street parties are going on and no one really seems to inclined to do any actual killing. Upon seeing a couple having public sex on the bonnet of a car a character remarks something along the lines of "well, I guess that would normally be a crime". The films up to this one have usually focussed more on murder than anything else so it was nice to get some other types of illegal activities showing up.

Visually The First Purge is pretty stunning, costume design has always been a strong point and it just doesn't drop the ball here, I also liked some of the editing that gave various crazies an off kilter surrealist vibe to them. During action scenes the camera work often resorts to more intrusive almost hand-cam type footage that added atmosphere without ever making things confusing to follow. The plot in general is typical of the series but does go to some darker places, the most dark being it heavily insinuated that a whole bunch of young children were massacred off camera at one point. Usually to my memory children don't really get mentioned unless they are lead characters so this slight indication made things feel more traumatic. I say that as like always the slow countdown and the start of the Purge are very tense, represented by the warning alarms, as well as a countdown timer that shows on a black screen periodically. 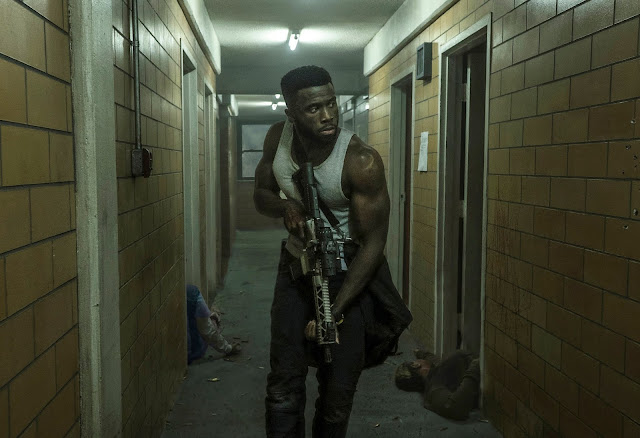 You can probably tell but I really do enjoy The Purge series, the idea is just so interesting to think about. With Election Year wrapping up the story, and this showing the beginning I don't know where else this series could go, I really hope it isn't the end. I guess they could have an illegal Purge night as a future installment, a follow up to this one (The Purge: Year 2?) or even have a road-trip movie showing what things are like outside of cities. An update; it turns out a TV series is coming, will be interesting to see what they do with it.