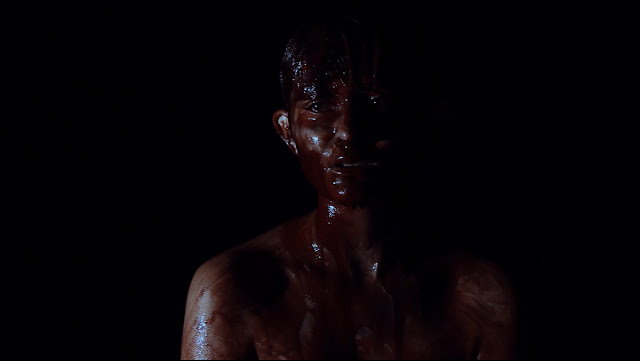 Dacryphilia + Hematolagnia is a short seven minute horror that was co-directed by Shane Ryan (Oni-gokko, My Name is 'A' by Anonymous) and Lilith Singson (Kamatayan) who also stars in this. As the title suggests it is made up of two halves, both that feature the same actress. This is an experimental film, as such it wasn't really my thing as I didn't really understand what it was going for.

'Chapter 1 = Her Life' takes up roughly half the short. It is a series of fast edits of two people covered in blood, throughout this it goes back to someone laying on the ground seemingly dying as a woman plays around with the blood on their face. 'Chapter 2 = Her Death' follows the girl from the first part as she walks around a forest, this part is shot in black and white.

Yeah, as I said I really didn't understand this much. There are some nice shots in chapter 1, there is great use of focus, and some strong images, such as how it ends with the woman looking tripped out staring into the camera. Looking up the title's meaning, dacryphilia is a term for one who is aroused by tears or sobbing, hematolagnia meanwhile is a sexual arousal by blood, which I guess explains chapter 1 a little better for me. While not much really happens in chapter 2 it was shot in an attractive way, and features a fantastic final flickering image of the woman in silhouette as this strange insect like sound effect plays.

Despite not really getting the message here I found Dacryphilia + Hematolagnia to be an interesting short that is backed up by some strong editing and some strong imagery, as well as a healthy amount of blood and some nicely lit scenes. This was something I initially didn't think I liked, yet found myself strangely drawn back to it again and again the days after first viewing it.