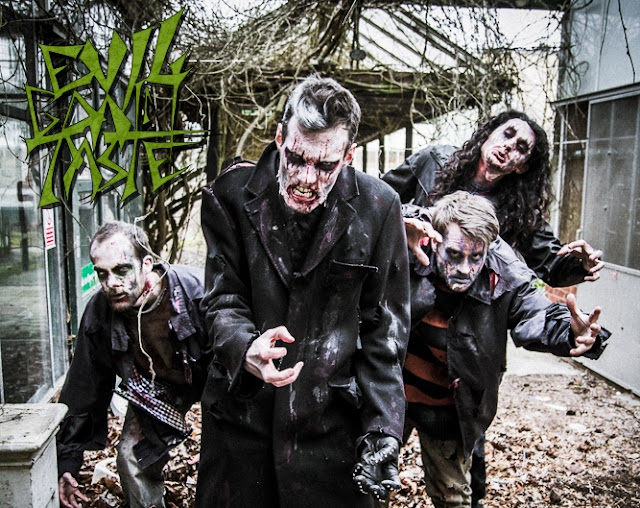 Back in 2015 I became aware of UK thrash/death/black metal band Evil Brain Taste when I was sent the video to 'The Taste of Evil Brains' that was taken off their debut album Dead Dead Bad. I enjoyed the song so much that I went and brought that album. Well  they have recently put out some new music - a six track EP titled I Am Evil Brain Taste that was released on 31st May. Even better is that it is currently free to listen to on YouTube. I don't often review music so I hope you can at least take the feeling I got from listening to this, even if I don't know how to explain how the music actually sounds.

Send More Paramedics were one of my favourite bands back when they were still un-living, and so I have a lot of time for any similar style of music that rises, especially when the band members are all of the undead variety! The members consist of Bone - vocals, Stench - guitars, Chot - Bass, and Legg - drums. As can be inferred by everything said so far this band are not about tackling serious issues, but instead just produce music that is not only entertaining and silly, but which is also actually competent and played to a satisfying degree.

First track on Evil Brain Taste's latest EP is 'The Day When Everything Became About Brains' which is a glorious five minute instrumental held together from various soundbites detailing zombie apocalypse. Starting off with news reports of the dead walking it leads up to a final desperate message from a man under siege wondering if he is the last human alive on Earth.
Next up is three minute titular track 'I Am Evil Brain Taste' that is the first we hear of frontman Bone's almost whisper like growling singing style. I have to say I was impressed with the quality of the recording on this EP, I did kind of expect muddy production but everything is crisp and clear to hear with the rotting vocals coming through for the most part clear.
Following this is the excellent 'Spider Bath' that again comes in at around three minutes. Like the rest of their songs this has a really great chugging style to the guitar work, the lyrics that contain such lines as "you can take the bath out the spider, can't take the spider out the bath" work so much better than they should, and actually imparts a sensible message about how stupid it is to be scared of the mostly harmless creatures.

Onto the second half of the album now with 'Terinator' that is about the funny tale of someone recounting how they used to draw pictures based on VHS covers as a child, but one day made the traumatic mistake of missing out the letter M when drawing the cover for The Terminator. This has a nice energetic chorus and a fun little soundbite paraphrasing Arnie "If you're alive you are coming with me". Again what I love about this style of music is the chugging guitar, it makes the songs feel like they could go on indefinitely in the best way.
'Ghosts' follows this and unsurprisingly is about ghosts, specifically hunting for them. It has some old style spooky music blended in, and no end of entertaining lyrics, such as "ghosts - are they in the cupboard, ghosts - is it just thin air?".
Final track ends on an undead note again with 'Ultimate Zombie' which eventually leads into a great riff that wouldn't have sounded out of place with the original version of the Doom video game.

I Am Evil Brain Taste is an enjoyable 22 minutes of zombie death metal that in my humble opinion is well worth a listen. There sadly are not too many good bands that do this style nowadays. I will include the link to the EP below so check it out if it appeals.