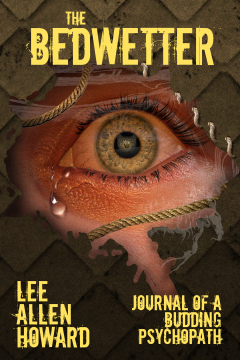 From the very first page of Lee Allen Howard's The Bedwetter: Journal of a Budding Psychopath I was repulsed; a graphic description of a sordid dream featuring urination, self pleasuring, and death. But then the clue is in the books title, this is written from the twisted perspective of a psycho and so this opener was like a statement of intent for the course the book would chart. It's not new to have a story told by a terrible person, ones such as Hubert Selby Jr's The Demon, and of course Bret Easton Ellis's American Psycho (of which this sometimes feels similar to). Despite that though it is done rarely enough that it sticks out from the more traditional tales.

Russell Pisarek is a damaged twenty-six year old both haunted and shaped by the awful abuse he suffered at the hands of his mother as a child. He works at an animal testing laboratory and shares a house with his sister Becky and her young son Aiden, but is lost, and prone to frequent uncontrollable fits of anger. Over the course of The Bedwetter he comes to realise his true sinister calling in life and sets out on a murderous path from which there is no returning.

There's no getting away from the fact that Russell is a truly nasty protagonist but the book goes at least some way to clearly explain why he happens to be this way. The abuse he suffered shaped him, and as such he is trapped. Coming from his viewpoint you can at least see why he is like he is even if you find his actions disgusting. It would have been easy to make a one dimensional villain, but this past makes Russell into someone more fleshed out. This is all told via conversations he has with family members, frequent dreams and nightmares that plague him, and his own dark thoughts. While I could never get on board with his actions, at least with the thoughts he provides you can kind of understand his reasoning for them.

Being essentially a journal (though set out like a traditional novel) it was nice to read him every now and again talking about adding to it, I believe there was even mention of the reason why he started writing it in the first place. I also liked how localised the story was, for the most part the same small number of locations are used, from Becky's house, to the lab, and later to a bar he starts to frequent. This cycle of repetition makes Russell seem more normal in a way. Some of the best moments, and the more awkward ones comes from his interactions with other characters. I liked how much the character genuinely likes his nephew Aiden, that was the one person he never had any twisted thoughts or anger towards. I also liked how he had conflicted thoughts about his sister. She does things that make him feel betrayed, yet occasionally in moments of clarity he does actually think 'oh, maybe she was right after all'. The local military surplus store manager was another interesting one, he almost seemed like a God type character who was subtly influencing Russell's actions.

There comes a point though when I had a real split with the character, this occurs at around the halfway mark. I was reading it hoping unrealistically that this would be a turning point in a good way, and so after a barbaric scene (that most reminded me of American Psycho) I realised things wouldn't end happily, though that really is a matter of opinion. While the book is well written sometimes I thought Russell's way of talking was pretty awful, especially his often used 'Lolz!', but that is a criticism of the character, not the writer. There are quite a few moments that are darkly comical, I loved how his anger meant he would often get into this absurd shouting exchanges with random people he encountered, such as a lady on a stairway that he is trying to drag a large duffel bag down past. The story is an origin one of sorts, by the end Russell has left the 'budding' part of his transition and straight into 'psychopath' territory, this change was handled well enough.

With books like American Psycho, and Chuck Palahniuk's Haunted I felt unclean just reading them, they felt like trails of endurance to be taken on journeys by such awful characters. Here though I only occasionally got that feeling, I think that is down to giving the lead a sympathetic back story. If you are in the mood for a sordid journey of depraved thoughts, twisted thinking, and plenty of bedwetting then look no further than The Bedwetter: Journal of a Budding Psychopath.