The Rotting Zombie's Round-up of Horror News for June 2019 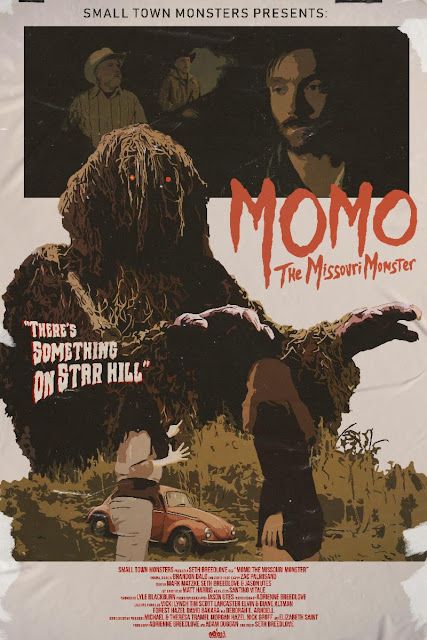 This year is going by so quickly, it seems like only yesterday I was doing the news round-up post for May. It's a humid day today so I'm feeling kinda sleepy, though sure that won't affect this post! I had planned to have Monday as a designated blog day, but that was too much so am spreading the weeks posts out over three days, and putting up one post every two days.

The surreal anthology show Bible Black currently has its first episode free to watch. Apparently this has been banned in several states in America. The show is almost like a graphic novel come to life and features dark and twisted stories.

The excellent found footage horror Butterfly Kisses has now been released on various VOD platforms that includes iTunes, Google, Xbox, Amazon and Vimeo. It follows a wannabe filmmaker who discovers a box full of creepy DVR cassettes and decides to edit them together so he can release a real life found footage film. I said of this "is a film that reminds me just how much I love horror."
I mentioned in May's news round-up that there was going to be an anthology book about the legend of Peeping Tom (the evil force from Butterfly Kisses) released, and now there is a podcast that has been released that goes more into this fictional legend. Hosted by Michael Joy, he is joined by the director of the film, Erik Kristopher Myers, and the author of the upcoming book 'In The Blink of An Eye', Patrick Glover. The podcast can be found here.

Also recently released is the bizarre, yet great Rondo that I described as "an exciting, darkly comedic revenge thriller", and which pays homage to the exploitation films of the 1970's. It is now out on DVD and VOD.

Cautionary Comics have announced Offworlder issue #1 that is 'an Epic Fantasy that mixes History with Science Fiction'. It stars Henry Gunn who is a seventh century Scotsman that gets abducted by an alien race. They want him to stop an evil alien race from conquering the universe. It has been described as 'Highlander in space'. For more details check out the Indiegogo page here.

Drag queen horror film Killer Unicorn has been acquired by Indican Pictures. It is the latest film from director Drew Bolton and writer Jose D. Alvarez. It takes place in the underground dance scene of Brooklyn, New York and is about a serial killer who targets drag queens. It came to theatres in the U.S June 14th, and will be coming to DVD and Digital platforms July 9th.

Terror Films have acquired worldwide rights to ride-share feature horror-thriller End Trip. It features Aaron Jay Rome (who wrote, directed, and produced this) as Brandon, a rideshare driver who picks up Judd (Dean West). The two seem to be striking up a new friendship but for one of them things are about to get dangerous. This was due for release on June 21st, initially in North America on Prime Video and Vudu. Later in the year will see it get released on other platforms, and on DVD.

Gothic/Death Rock band Christian Death have released a new video for their song 'Forgiven'. This comes from their latest album The Root of All Evilution. You can check that out below. Christian Death are currently on tour.

Jeff Payne's (The Pale Faced Lady, Michael Myers Versus Jason Vorhees) is currently working on a sequel to The Pale Faced Lady. I said of that short film that there were not any surprises to be found, it was also slightly experimental with how the story was told. The sequel sounds like it will be traditional as it is to focus on one character and takes place in real time, as opposed to the almost fairytale style story of the first one. Payne is a genius when it comes to editing so I look forward to seeing if this can build on the ideas of the first film.

Small Town Monsters have revealed a first look at their new docudrama MOMO: The Missouri Monster. This intends to tell the real life story of the titular creature. It was said to be a hair covered three-toed creature that prowled the forests of Star Hill during the summer of 1972.

I had originally planned to end this months news post here, but in the past week I have received some more info about cool new things and so hot off the press...

Creature Feature Weekend is coming to Gettysburg this August. This is a new horror convention that is going to run from 30th August to 1st September. Confirmed special guests include among them Corey Feldman and Jamison Newlander (The Lost Boys), Joe Bob Briggs (The Last Drive-In), Glen Ennis (Freddy vs Jason), Tom Woodruff (Aliens, Pumpkinhead), Billy Bryan (Army of Darkness, Ghostbusters) and Walter Phelan (House of 1,000 Corpses, Tales from the Crypt: Demon Knight). If you're interested tickets can be brought here.

The only information I have for this next one is a title - Vampyrz on a Boat, and going by the trailer this seems like an accurate description of what the film will involve. This one comes from Firebreathing Films.